Christie’s and de GRISOGONO will present: The Art of de GRISOGONO, forming a partnership that will bring to auction the most exquisite diamonds ever offered to the market, with Christie’s forthcoming auction season in Geneva highlighting the very best of de GRISOGONO by presenting a unique necklace suspending a 163.41-carat, D colour, flawless, IIA type diamond.

Rahul Kadakia, International Head of Christie’s Jewels commented: „Over our 251 year history, Christie’s has had the privilege of handling the world’s rarest and most historic diamonds. The sensational 163.41 carat perfect diamond suspended from an elegant emerald and diamond necklace propels de GRISOGONO into a class of their own.“

Established in Geneva, Switzerland in 1993, de GRISOGONO was founded by Fawaz Gruosi on three pillars: craftsmanship, innovation and creativity.

On the eve of the 25th anniversary year of de GRISOGONO, the founder’s vision is to expand his fine jewellery collection by working exclusively with a handful of the largest flawless diamonds of perfect polish and symmetry. Combining these unparalleled stones with years of craftmanship, the first exceptional jewel has been created around the largest D colour, flawless diamond ever to come to auction, a 163.41 carat stone, cut from a 404 carats – rough, which was discovered in early February 2016 in the Lulo mine, located in the Lunda Sul Province in Angola. 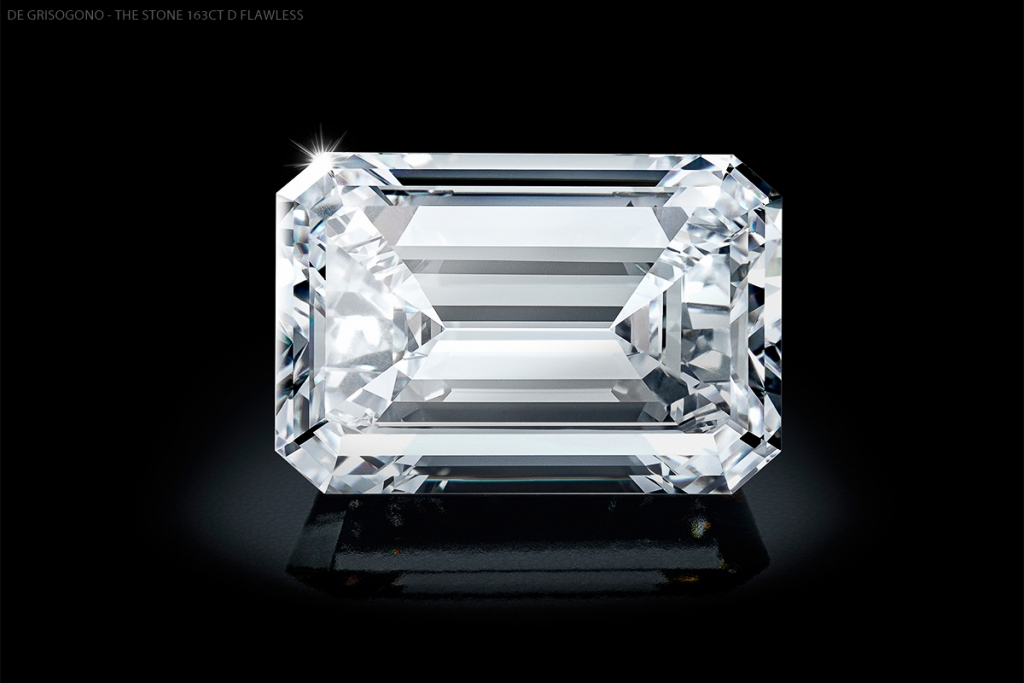 The “4 de Fevereiro” rough is the 27th biggest rough white diamond ever discovered and the largest in Angola. The rough was analysed in Antwerp and cut in New York, where a team of 10 diamond – cutting specialists were involved in mapping, plotting, cleaving, laser – cutting and polishing the rough 404.20 carat into a unique 163.41 carat emerald – cut stone. The first cut was done on 29 th of June 2016, when the 80 year old master diamond cleaver performed a cut along a grain line to cleave the crystal in two. After 11 months of work the polished 163.41 – carat stone was ready to be send to the GIA in late December 2016. To date this is the largest D flawless diamond ever to appear for sale at auction. 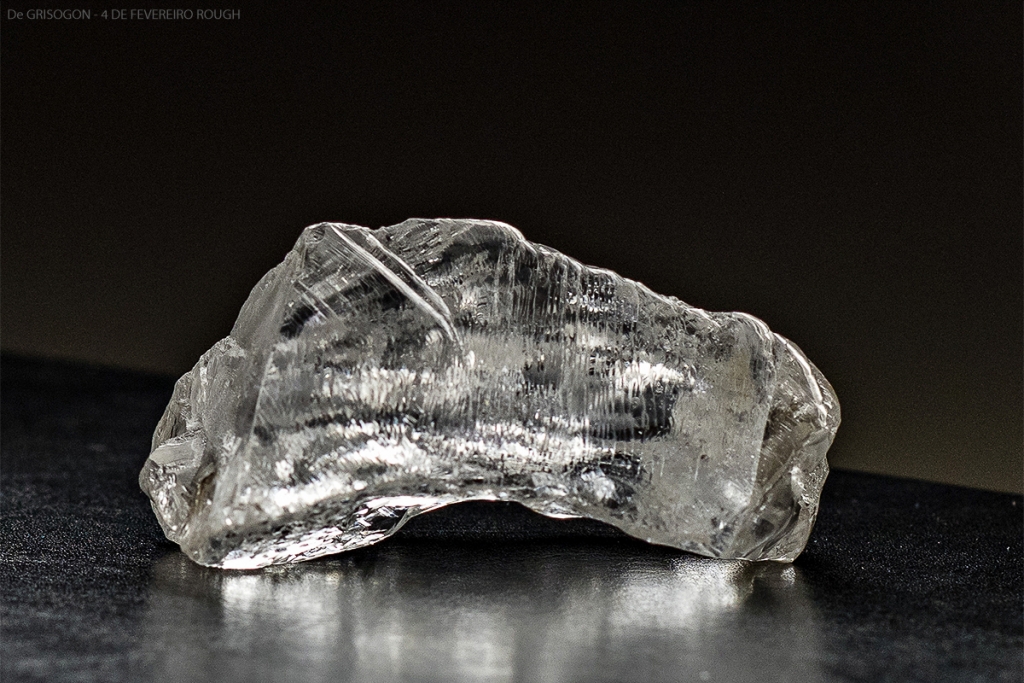 In Geneva at de GRISOGONO, Fawaz Gruosi, together with his team created 50 different designs around the 163.41 – carat stone and in early February 2017, coinciding with the first anniversary of its discovery, the final choice of the design was made: an asymmetric necklace with the 163.41 – carat diamond as the centrepiece, trailing on the left side 18 emerald – cut diamonds and to the right two rows of pear – shaped emeralds, offering a fresh contrast to the cool white diamonds as well as a nod to Mr. Gruosi’s superstition – green means good luck – and hence, emeralds take a central part in his collections. No gold is visible between the emeralds as each gem is perfectly matched with its neighbour and the metal is darkened to create the chiaroscuro effect that is so characteristic of de GRISOGONO. The prongs holding in place the 163.41 carat diamond disappear under four baguette – cut diamonds creating an effect of dazzling brilliance. The reverse side of the gold basket is engraved with the diamond’s weight and set with yet more diamonds.

It took over 1700 hoursto create this unique jewel and involved a team of 14 craftsmen and their know – how as well as love for perfection for each detail in the necklace.

Christie’s is honoured to present to the world this masterpiece of unparalleled beauty and exquisite workmanship during their preview exhibitions in Hong Kong, London, Dubai, New York and Geneva. 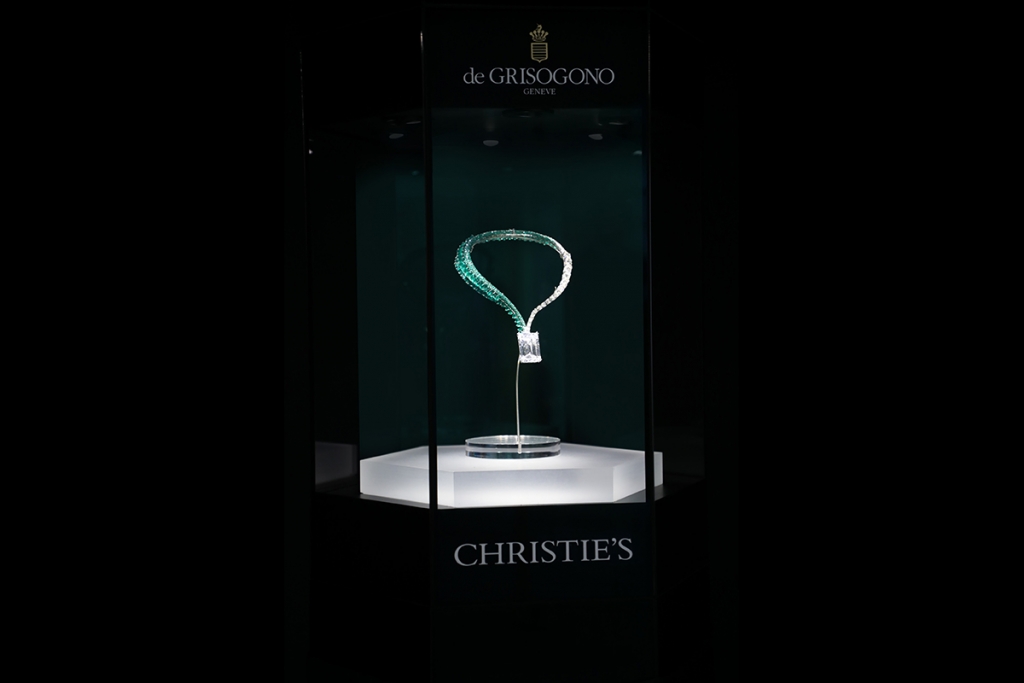 The necklace will be offered in the Magnificent Jewels auction taking place on 14 November in Geneva at the Four Seasons Hotel des Bergues.

CHRISTIE’S AND DE GRISOGONO IN DUBAI