A bronze statue of Claude Nobs is being unveiled on Sunday 2 July 2017 at 5:00pm. The result of an initiative by the Fondation du Festival de Jazz de Montreux and the Claude Nobs Foundation, this work was produced by Swiss sculptor Andreas Altmann. The statue, donated to the city of Montreux, will be installed in the garden of the Fairmont Le Montreux Palace. Claude Nobs will thus symbolically rejoin his musician friends whose statues already decorate the area. 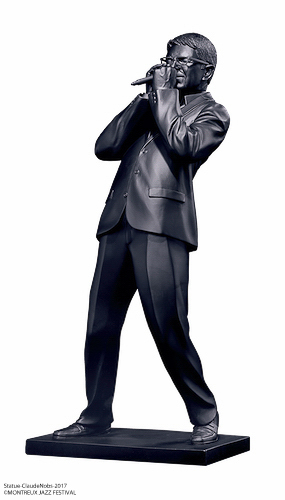 On his feet, grooving to the music, harmonica and microphone in his hands: a very familiar scene for the Montreux public! The intricate work by the sculptors even calls to mind the way Claude moved during his legendary jam sessions with B.B. King, Eric Clapton, and Carlos Santana.Claude Nobs will be represented surrounded by his artist friends in the garden of the FairmontLeMontreux Palace. His statue will join those of Quincy Jones, Aretha Franklin, and Ray Charles.

Passionate about bronzes, the founder of the Montreux Jazz Festival was the moving force behind numerous sculpture projects, including the Miles Davis statue on the Montreux lakefront. A reminder of Claude’s past role at the Tourist Office, as he was conscious of the symbolic power of such a sculpture, with the most striking example being that of Freddy Mercury.

The result of exceptional know-how

Andreas Altmann and his team at Gilberg Swiss Noble Forge painstakingly studied a large number of photos of the Festival founder.

Andreas Altmann explains: “I went up to the Chalet to soak it in and feel the atmosphere.”

The artist first created a 35cm model in wax. This was then scanned to produce the final size at the Art Foundry in St. Gallen: 200cm and 350 kilos. The bronze sculpture, with an impeccable black patina, was finished off by hand by Andreas Altmann, who then graciously donated the work of art.