VOLTA’s journey started 14 years ago at Volta-Platz in Basel, right around the corner from our latest venue,” notes Amanda Coulson,VOLTA Artistic Director.

„Throughout the years, VOLTA consistently claimed new territory through content and location. Always evolving, continuously reinventing our shape, consistently moving forward, constantly exploring new terrains and positions. We aim to do what we do best: providing a platform for professional gallery work while remaining a place for research and discovery.” 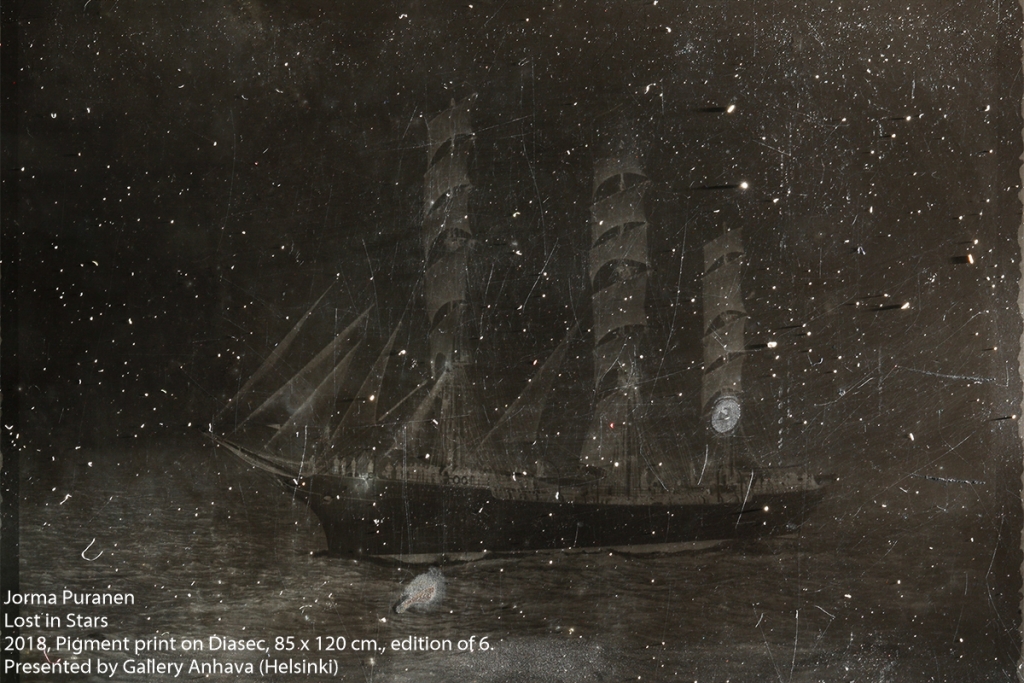 Half of the positions this year feature solo artist projects and “dialogues” between two artists, the foundation of VOLTA’s focused and artist-centered program. Among the 20 solo presentations for 2018: Jorma Puranen (presented by Galerie Anhava , Helsinki), a conceptual photography pioneer and celebrated vanguard of the Helsinki School; Malala Andralavidrazana (presented by Alessandro Casciaro, Bolzano), the Paris-based Malagasy artist whose re appropriated precolonial maps encourage cultural centering and global connectivity; Jaco van Schalwyk (presented by Barnard Gallery, Cape Town), who unveils Nemora, an enveloping forest installation that reflects both Paradise and the peril of over-industrialization; Ilona Szalay (presented by Arusha Gallery , Edinburgh), a Threadneedle Prize finalist, whose figurative compositions on aluminum speak strongly to #MeToo; and a commentary on value structures, via mechanized cardboard object-sculptures by Daniel Agdag (presented by MARS Gallery, Windsor), whose film Lost Property Unity was shortlisted for Best Animated Short at the 2018 Oscars.

Highlights from the 20 dual-artist booths at VOLTA: a consideration on art as activism presented by AD Gallery (Athens), featuring Manuel Ocampo, who co-represented The Philippines at the 57th Venice Biennale, and Mihael Milunovic , subject of a major solo exhibition at the National Museum of Contemporary Art in his homeland, Serbia; an interface of digital and physical realities implemented by SCAG (Vienna), featuring new media rising stars Christiane Peschek and Julian Palacz; and across-generational celebration of an artist’s handwork at Tezukayama Gallery (Osaka), starring mark- making minimalist veteran Moriyuki Kuwabara, who made his Art Basel debut in 1977, and emotive figurative sculptor Yoshiyuki Ooe, whose own international splash occurred nearly 40 years later at Art15 London.

The other half of VOLTA14 exhibitors convey thematic concepts and material surveys, with highlights Subscribe Past Issues Translate including: “Tables Pots and Plants – A Song forMatisse”, a love-letter to the still-life from V1 Gallery (Copenhagen), featuring an ensemble cast from the gallery’s international roster, furniture by Charlotte Perriand, and a publication; “The Hierarchy of Scale” by Charlie Smith London (London), highlighting the classical power imbued in artworks miniature and monumental, with artists’ differing dimensions in direct dialogue with one another; and Primae Noctis (Lugano) champions distinct local tradition and sociopolitical concerns across the African continent, led by Abdoulaye Konaté, the celebrated Malian textile artist whose recent exhibitions include a two-decade survey at ARKEN Museum of Modern Art (DK) and a major installation for Vive Arte Vive at the 57th Venice Biennale.

VOLTA14 moves location for the upcoming 2018 edition, inaugurating the former COOP distribution center at Elsässerstrasse 215, adjacent to Novartis Campus, the Basel headquarters of the global healthcare company. Following the adage “there’s no place like home”, VOLTA’s new venue is a five-minute walk from Voltaplatz, site of the original VOLTAshow and down the street from where the Rhine baptized its founders back in 2005. VOLTA14 opens in previews on Monday, 11 June and continues through Saturday, 16 June, concurrent with Art Basel Week 2018