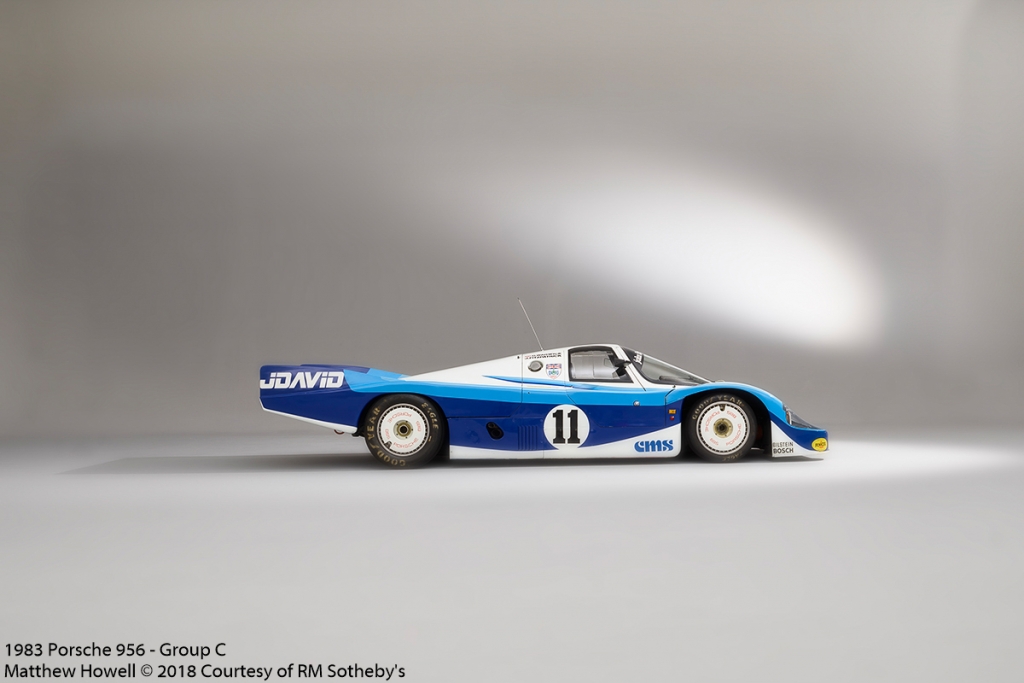 Few race cars of the Porsche pantheon are as universally acclaimed as the 956. The car is a brilliantly engineered aesthetic wonder, born of another round of FISA changes that ultimately resulted in the emergence of several marque innovations. The 956 was the first Porsche race car to feature monocoque construction, as well as the first to feature so-called ground effects; the aerodynamic channeling body features that maximize cornering force. Hugely successful from the start, the model took a 1-2-3 finish at the 1982 24 Hours of Le Mans in just its second race and would go on to dominate the next few seasons.

This 1983 Porsche 956 Group C, chassis no. 956-110, is a true time-warp example. One of just nine privateer cars built by the factory to compete in the 1983 World Endurance Championship season, no. 110 was originally bound for the legendary Fitzpatrick racing team and debuted as their lead car at the 1983 24 Hours of Le Mans with John Fitzpatrick, Dieter Quester, and David Hobbs at the wheel. Though the car retired due to fuel-pump failure, success was not far off. Just three races into its career, this 956 landed its first overall win at the Can-Am Road America in July 1983 at the hands of John Fitzpatrick, who secured a commanding 12-second lead over the second place Frisbee GR2 Chevrolet. Podium finishes were abundant from there, with chassis no. 110 achieving 3rd overall at Can-Am Mosport, 1st overall at the 1000 KM at Brands Hatch, 2nd overall at the 1000 KM Imola, 3rd overall at 1000 KM Mugello and Silverstone, and contending the 24 Hours of Le Mans one last time in 1984. 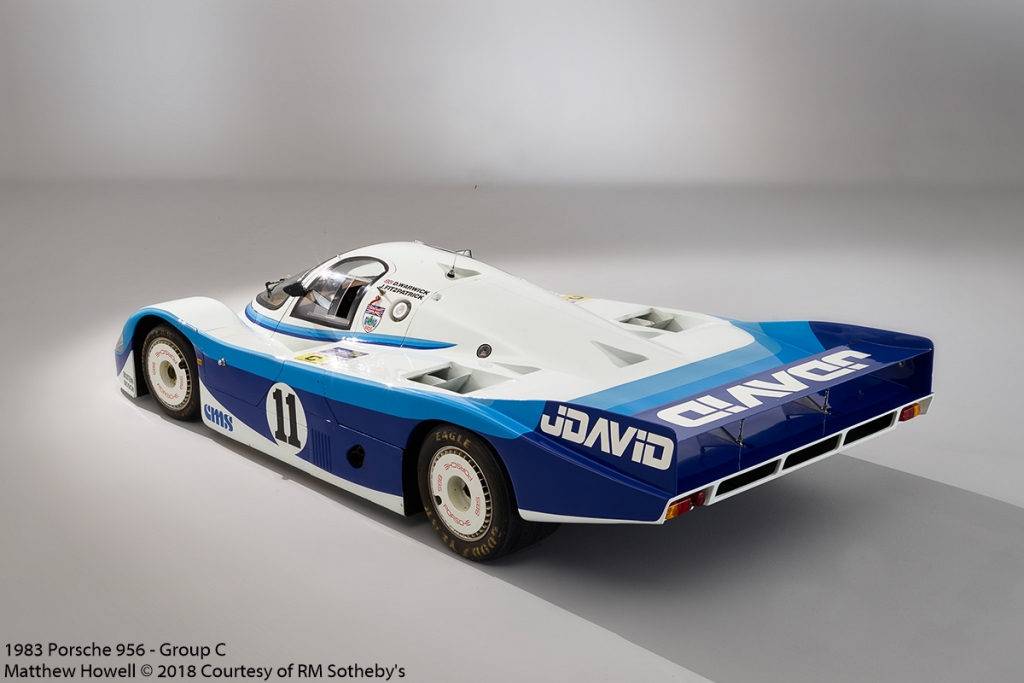 Hugely successful on the track and the only 956 to compete and win on American soil in period, the Porsche joined a private collection immediately following the 1984 24 Hours of Le Mans and has had just three private owners since this time. Offered from its current owner of 16 years, the 956 is presented in its 1983 Le Mans livery and is likely the most original example of the model in existence. With an excellent driver lineup that includes John Fitzpatrick, Derek Warwick, Thierry Boutsen, and Alain de Cadenet, as well as the well-known liveries of J David, Skoal Bandit, and Rollei, the Porsche is an ideal candidate for preservation class concours entry or for vintage competition at the Le Mans Classic and 24 Hours of Daytona historic races. RM Sotheby’s estimates that the 956 will achieve $5,250,000 – $6,750,000* when it crosses the podium in Atlanta. 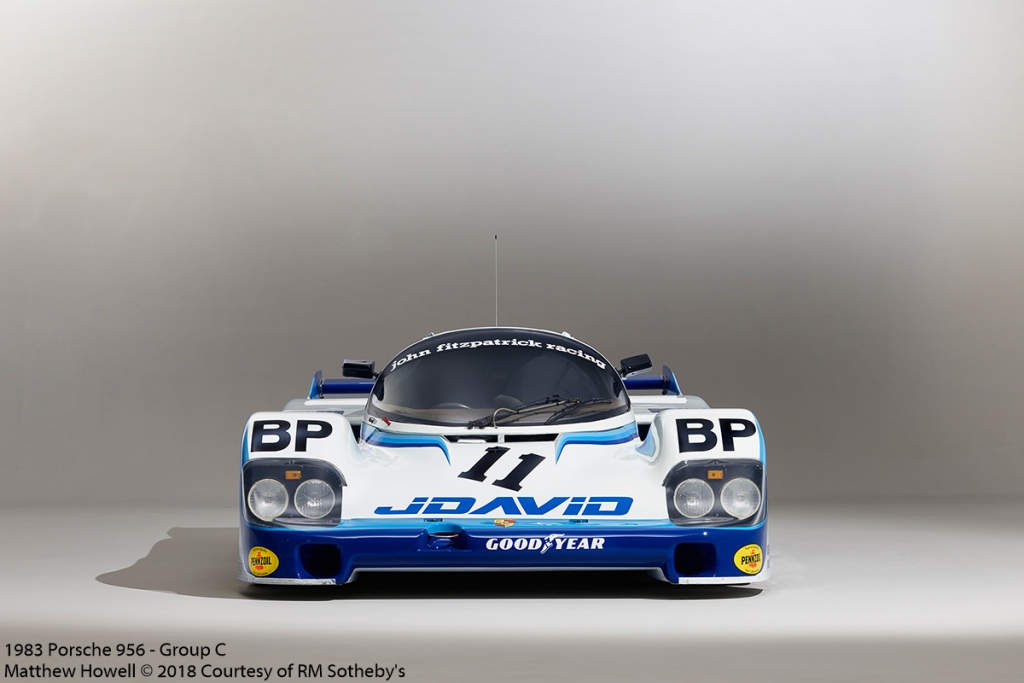 “The 956 is an important addition to our Porsche 70th Anniversary auction lineup,” says Alexander Weaver, Car Specialist, RM Sotheby’s. “The 956 model was a highly successful sports racing car and is considerably rarer and more user friendly than its Group 6 sister car, the iconic 917. Given that the car was raced by one of just two privateer teams to ever beat the Works Rothmans team with a 956 in a 1,000 KM championship race, and the only 956 to win in the U.S., it is especially fitting that the car be offered at the Porsche Experience Center Atlanta during the 70th anniversary year. This is a rare opportunity for Porsche racing enthusiasts that won’t soon repeat itself.”

Additional highlights for the auction include:

For the early Porsche enthusiast, offered is a highly desirable ‘Super’ Speedster that is a prime example for restoration. Largely complete, this 1958 356 A 1600 S Speedster retains its original 1600 pushrod four-cylinder, air-cooled engine and four-speed transmission, as documented by a copy of its Kardex and Porsche Production Specification certificate.This Speedster left the factory in Zuffenhausen on 7 November 1957 as a very basic vehicle built for the American market, equipped with sealed-beam headlamps, a speedometer reading in miles rather than kilometers, and U.S.-specification bumpers with front and rear over-riders. It was also optionally equipped with coupe seats, rather than the standard Speedster buckets that lacked an adjustable backrest. Although the original paint and interior colors are not listed, the door-jamb paint plate is stamped with code 608 for Silver metallic. That would have been matched with a red or black leatherette interior and a black canvas folding top with black Tonneau cover.After being shipped to Max Hoffman’s distributorship in New York City, 83799 was dispatched to its selling dealer and thence to its first owner. While its early history is unknown, it appears quite likely that this Speedster was first sold and spent most or all its life in or near Dallas, Texas, where the current owner purchased it around 1983 with the intent of restoring it. Instead, after sanding off most of the paint, the owner put the car into storage for the next four decades, still bearing its 1983 Texas license tag and state inspection windshield decal. A 1984 Texas registration issued to a Dr. J.S. Jackowski of De Soto, Texas, accompanies the car.

This Speedster is largely complete and even includes its original top and bows. Its next owner can expect to replace any sheet metal in the usual areas, including floor pans, trunk floor, and battery box. Happily, the 356 community offers numerous sources for these items, and a proper restoration should be a straightforward process.

The original 75-hp Super engine, fitted with a then-fashionable Bursch extractor exhaust system, is said to run, though the hydraulic drum brakes will require further servicing. The rear shock absorbers have been replaced with latter-day Bilsteins. Stamping on the four-speed transmission case reveals that the car is fitted with BBAB gearing. The car’s factory-installed coupe seats have since been replaced with more sporting Speedster buckets. Its speedometer/odometer head, which would have originally been a U.S.-spec unit, was also replaced with a metric unit which reads 13,390 km. Based on a 1983 Texas odometer disclosure form that accompanies the car, the correct total at that point was 113,390 km, or 70,457 miles, and the car has not been driven since.

Because of their relative rarity and charming simplicity, 356 Speedsters are an icon in the Porsche world and have become highly collectable. With an ever-shrinking number of unrestored and unmolested examples remaining, values have risen steadily. Bringing this survivor back to its original state is a “Super” opportunity that should not be missed.

The RM Sotheby’s Porsche 70th Anniversary Auction is an exclusive, single-marque auction to be held at the home of Porsche Cars North America (PCNA) in Atlanta. Set for the weekend of 27 October, the sale will feature approximately 70 of the world’s most important and most sought-after, privately-owned collectible Porsche models, spanning the marque’s illustrious 70-year history as a sports car manufacturer. The PEC Atlanta will be open for RM Sotheby’s registered bidders to view auction cars, 26 and 27 October, all made easily accessible thanks to the facility’s location adjacent to the runways of Atlanta’s Hartsfield-Jackson International Airport.

More About this Auction Here: