The perfect blend of gentility, glitz, hedonism, and top-rank motorsport, Monaco provides the perfect backdrop for RM Sotheby’s biennial Monaco auction. Held at the glamorous Grimaldi Forum, a venue synonymous with the principality’s most prestigious events, the Monaco auction takes place alongside the legendary Grand Prix de Monaco Historique, making for a weekend ripe with automotive excitement. Last year’s auction exceeded €27.5 million and was topped by the sale of the 1951 Ferrari 340 America Touring Barchetta, which achieved an astounding €7.280.000. 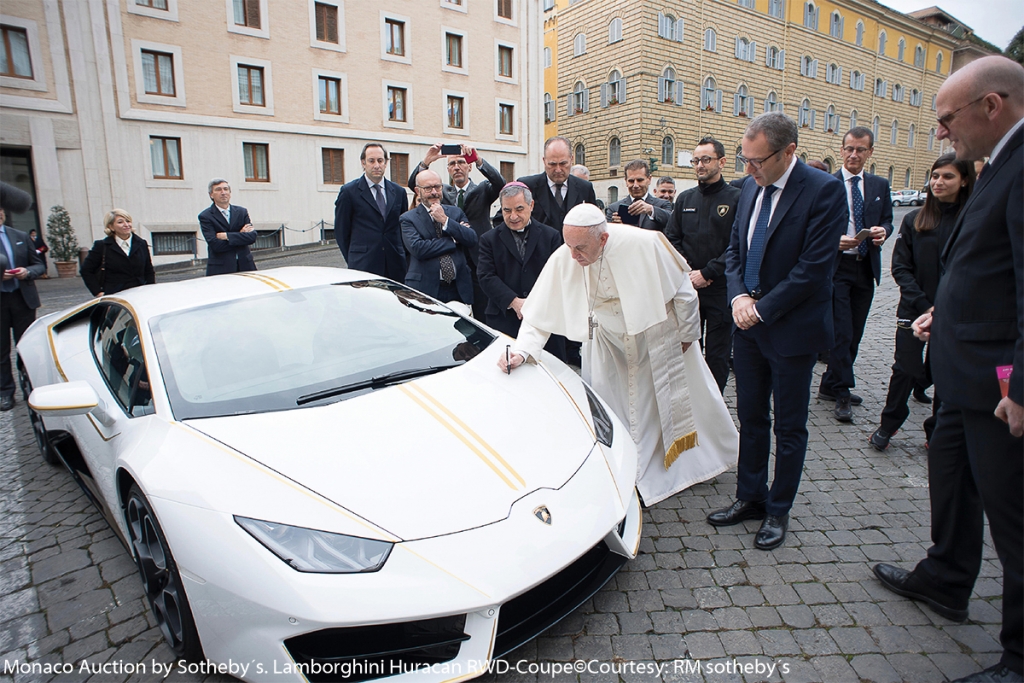 Donated to His Holiness Pope Francis by Automobili Lamborghini, all proceeds from the sale of this Huracán RWD Coupé will be delivered directly to the Holy Father, who shall allocate the proceeds as follows: 70% to the city of Nineveh, Iraq (a city heavily attacked and besieged by ISIS), 10% to ‚Amici per il Centrafrica Onlus‘, 10% to Groupe International Chirurgiens Amis de la Main (GICAM) and 10% to the Pope John XXIII Community Association.Customized and built to European specifications by Lamborghini’s Ad Personam program, the car is finished in Bianco Monocerus contrasted by Giallo Tiberino stripes and detailing in homage to the colours of the flag of Vatican City. Riding on diamond-finished 20-in. Giano wheels covering Nero callipers, the car is trimmed within in Bianco Leda Sportivo leather, with Lamborghini crests adorning the headrests. The final touch was added by the Pope himself, who signed the bonnet of the car upon seeing it for the first time. Presented in virtually as-new condition, the Huracán has remained in static storage since being produced in late 2017.Benefitting a quartet of deserving charities all near and dear to Pope Francis‘ heart, the sale of this Huracán represents a unique opportunity to acquire a wholly unique Lamborghini while giving back to worthy causes in the name of His Holiness.

LONDON (11 APRIL 2018) – RM Sotheby’s has announced an exceptional group of Ferraris as additional headline consignments at the company’s forthcoming Monaco auction on 12 May. At the biennial sale, hosted at the Grimaldi Forum, Monte Carlo, a 1957 Ferrari 250 GT Berlinetta Competizione ‘Tour de France’ is expected to draw worldwide interest, while other eras of the famous Italian marque’s legendary history will also be represented. Amongst a list of additional Ferrari highlights are a 1971 Ferrari Dino 246 GT by Scaglietti, once owned by F1 driver René Arnoux, alongside a bespoke 2011 599 GTO and the Geneva Motor Show 2015 Sergio.

The 15th of only 17 ‘three-louver’, covered headlight versions of the 250 GT Berlinetta Competizione ‘Tour de France’, chassis no. 0879 GT was completed in January 1958 and first sold to German racing driver Wolfgang Seidel of Dusseldorf, nicknamed ‘The Golden Bear’, who campaigned a 250 TR for the Scuderia Ferrari during 1958. Seidel immediately took to the track in his new Ferrari and – over the next few years – competed in 22 events across continental Europe. These included 11 victories and a string of podium positions, including 2nd place overall at the Pau 3 Hours, 2nd overall at the Belgian Grand Prix at Spa-Francorchamps, 1st overall at the Grand Handicap de Spa-Francorchamps, 4th overall at the 12 Hours of Reims with co-driver, the great Wolfgang von Trips, and 3rd in class at the 1959 Grand Prix de Paris at Linas-Montlhéry.

The availability of chassis number 0879 GT should attract top-tier Ferrari collectors and connoisseurs as a fantastic example of a model prized by collectors for its exquisite lightweight coachwork, advanced racing mechanicals and undeniable significance. The ‘Tour de France’ edition of the 250 GT Berlinetta Competizione has no association with the grueling bicycle race – rather, a racecar event staged between 1899 and 1986, held over several days. The car was produced from 1956 to 1959 and was designed for the circuit racing, hill climb and drag race stages of the Tour de France. It so dominated the rally that the model was nicknamed for the event, boosting Ferrari’s credentials as one of the most successful manufacturers in ‘50s motorsport.

“We’re delighted to bring this extremely exciting TdF to our Monaco auction,” said Augustin Sabatié-Garat, Auction Manager, RM Sotheby’s Europe. “The car is a true motorsport icon, and it has a strong history of powering drivers to success at the most celebrated events in Europe. Not only is this ‘Tour de France’ a piece of Ferrari history, it gives collectors the chance to own a very pure piece of motorsport heritage from a golden age of racing.”

The TdF eventually landed with Christer Mellin, found of the Ferrari Club Svezia, in 1973, who endeavoured to restore the car over the next two decades, with guidance from the Ferrari Factory in Maranello. In 1997, Mellin sold the car to its current owner, who has maintained the meticulous restoration while entering it in several niche events, including Ferrari anniversary celebrations and the Mille Miglia Storica. Unscathed throughout its racing career, the TdF has had just two caretakers in the last 45 years and is one of few surviving 1950s Ferrari race cars that remains fully matching throughout, as authenticated by its recent Ferrari Classiche certification. Accompanied by an extensive history file, chassis 0879 GT offers Ferraristi a pure and impressive example of a competition legend (Est. €7.000.000 – €9.000.000).The 1971 Dino 246 GT by Scaglietti represents another age for the Ferrari brand, also with a strong link to a history in motorsport. This car was once owned by ex-Ferrari F1 team driver René Arnoux, who would become one of the most famous Frenchmen associated with the prestigious Italian brand. Built as a European-specification M-Series Dino 246 GT, chassis no. 01862 was purchased by Arnoux before the driver joined the Scuderia. On joining the team, Arnoux had the Dino 246 GT restored at the Ferrari factory. For any fan of motorsport – and Arnoux in particular – it would be hard to find a more exciting prancing horse. 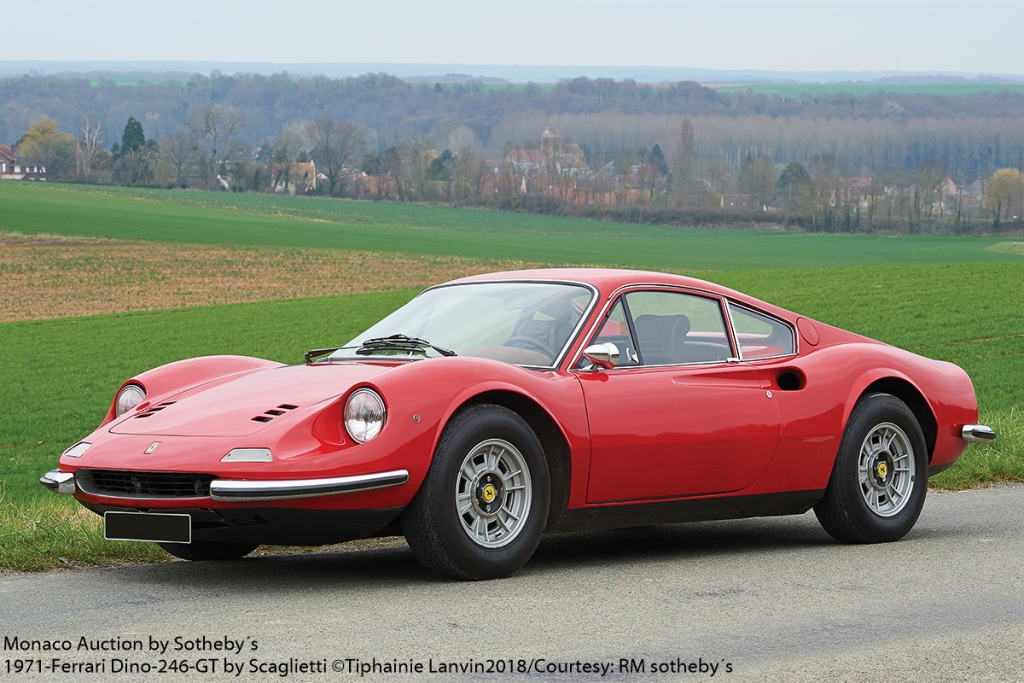 Another Ferrari set to headline consignments from the Italian marque in Monaco is a 2011 599 GTO, the most recent Ferrari produced to carry the fabled ‘GTO’ badge. The car has enjoyed one single owner from new and was tailor-made to customer specification, which includes a long list of unique features. The multiple layer car color – Nero Stellato, or black with gold sparkles – is complemented by a shiny black carbon fiber finish inside and out. A leather interior inspired by Hermès’ trademark orange moves away from the alcantara finish typical of the model, while seats and some leather-bound items appear with ‘Losangatura’ diamond quilting. This car has lived in a garage since new, covering a mere 3,800km. 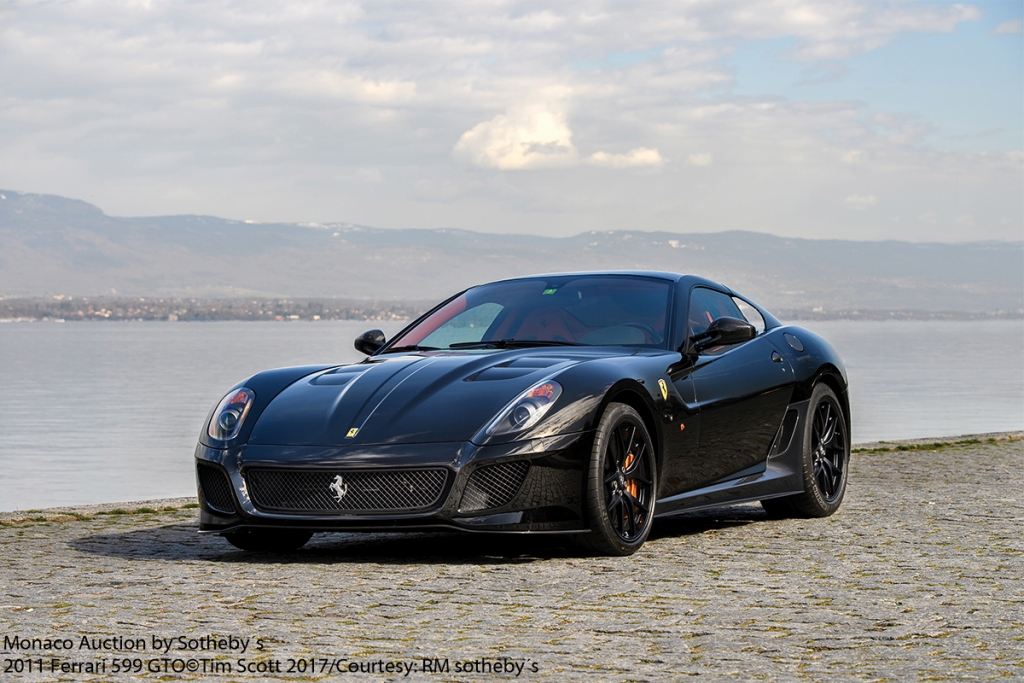 With no less than 25 examples on offer, additional Ferrari highlights for RM Sotheby’s Monaco sale include:

– One of 74 “Low Roof” coupes bodied by Boano, offered from long-term European ownership history. Equipped with its original engine and finished in striking Argento Auteuil Metalizzato, the 250 GT is Ferrari Classiche Certified and eligible for both the Mille Miglia and Tour Auto (Est. €800.000 – €1.000.000); 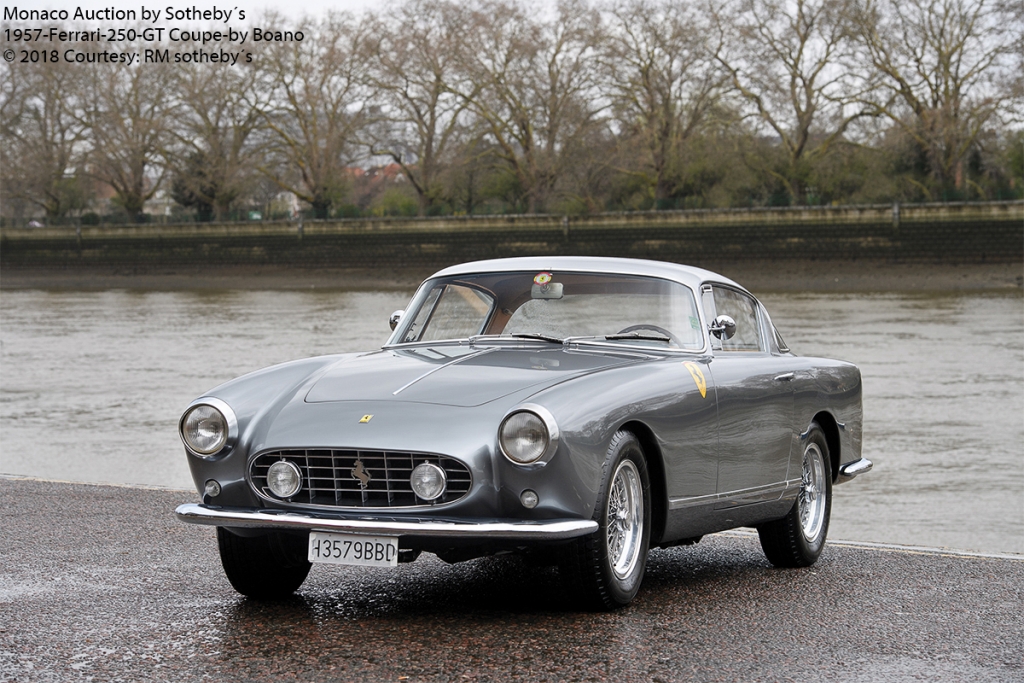 – Coupling performance of Ferrari’s legendary Colombo V-12 with the joy of opentop motoring, this Classiche certified example is complete with its original engine and gearbox and has been beautifully restored by some of Italy’s finest craftsmen (Est. €1.400.000 – €1.600.000); 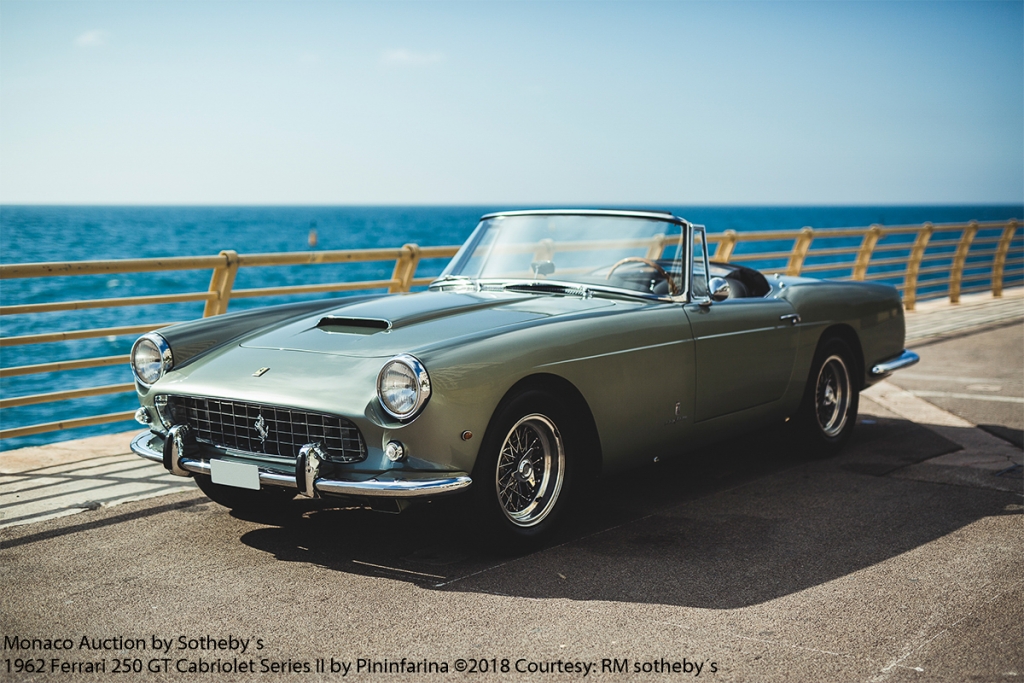 – One of 88 long-nose, steel body, triple-carburettor examples equipped with a torque tube driveshaft and built to European specifications. Boasting long, well-known enthusiast history, the 275 benefits from an exceptional restoration by Bob Smith Coachworks and is ideal for continued concours and rally use (Est. €2.000.000 – €2.100.000); 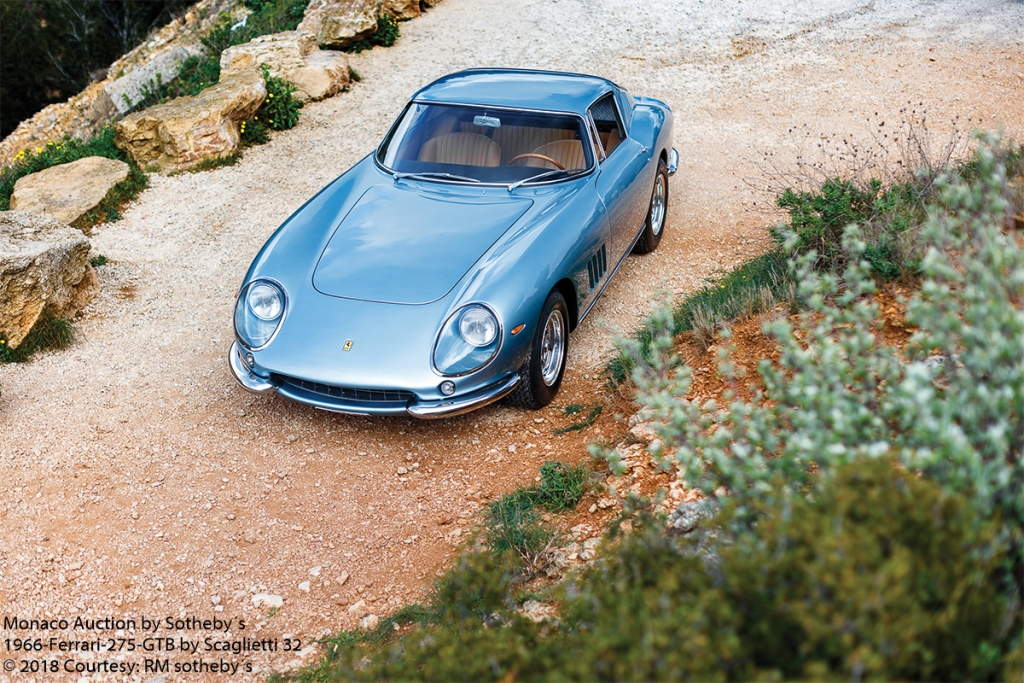 – An ‘E-Series’ Dino, this 246 GTS was delivered new to Switzerland, where it spent the vast majority of its life. Presented today in highly original condition throughout and finished in its original colors of Blu Dino Metallizzato over Pelle Nera, it boasts Ferrari Classiche certification to its name (Est. €390.000 – €420.000); 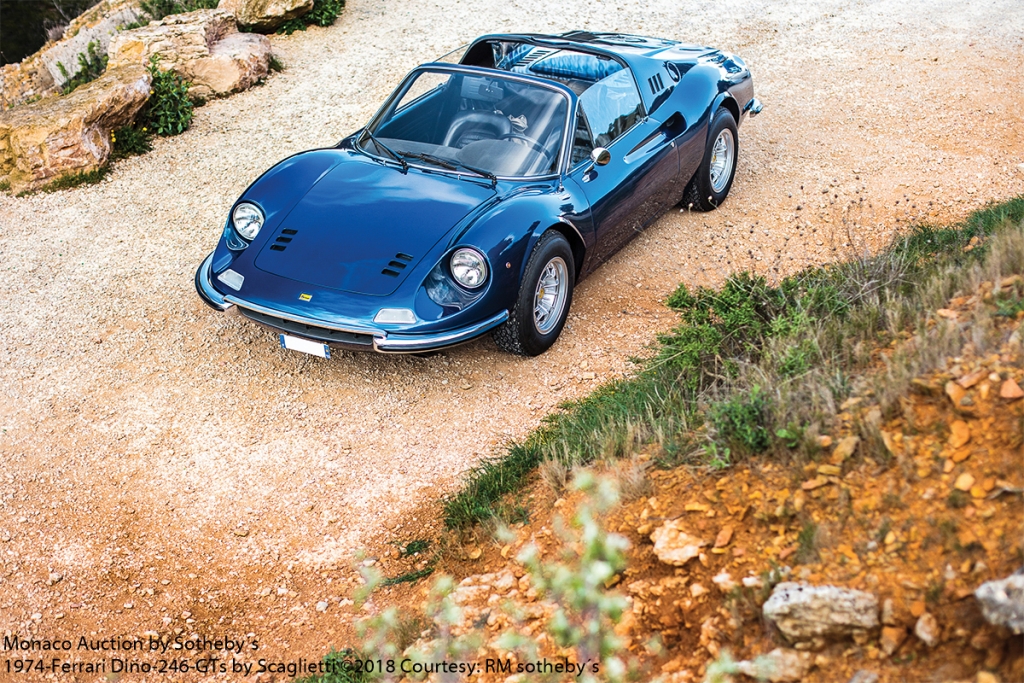 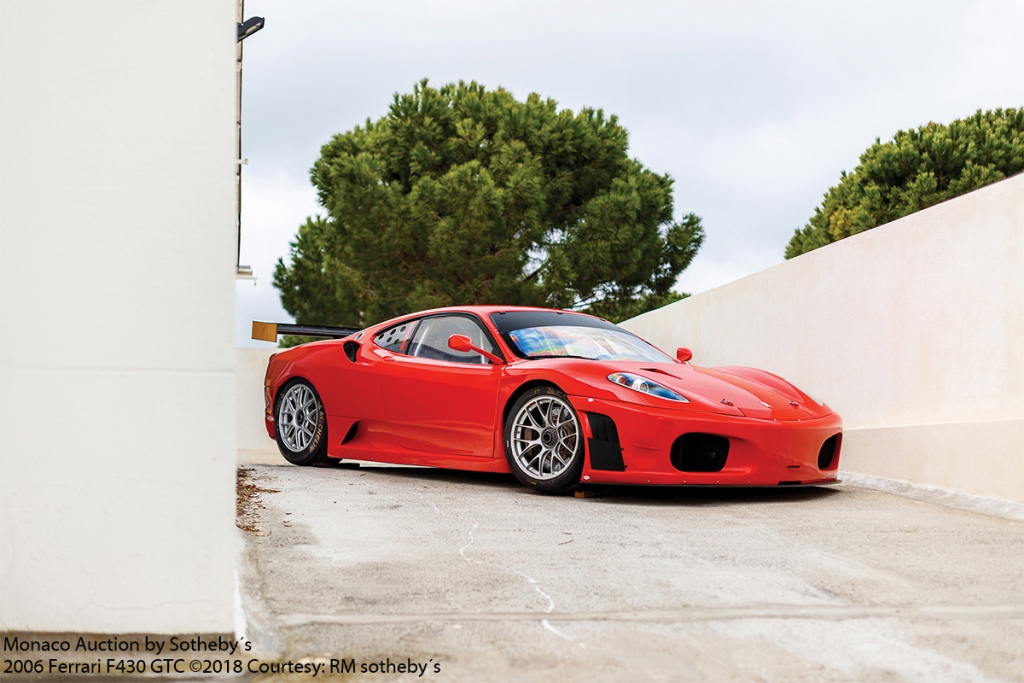 – One of just six examples built and a brilliant showcase of 21st century coachbuilding and Pininfarina design. This is the 2015 Geneva Motor Show car and represents the first Sergio offered at public auction (Est. €2.500.000 – €3.000.000); and, 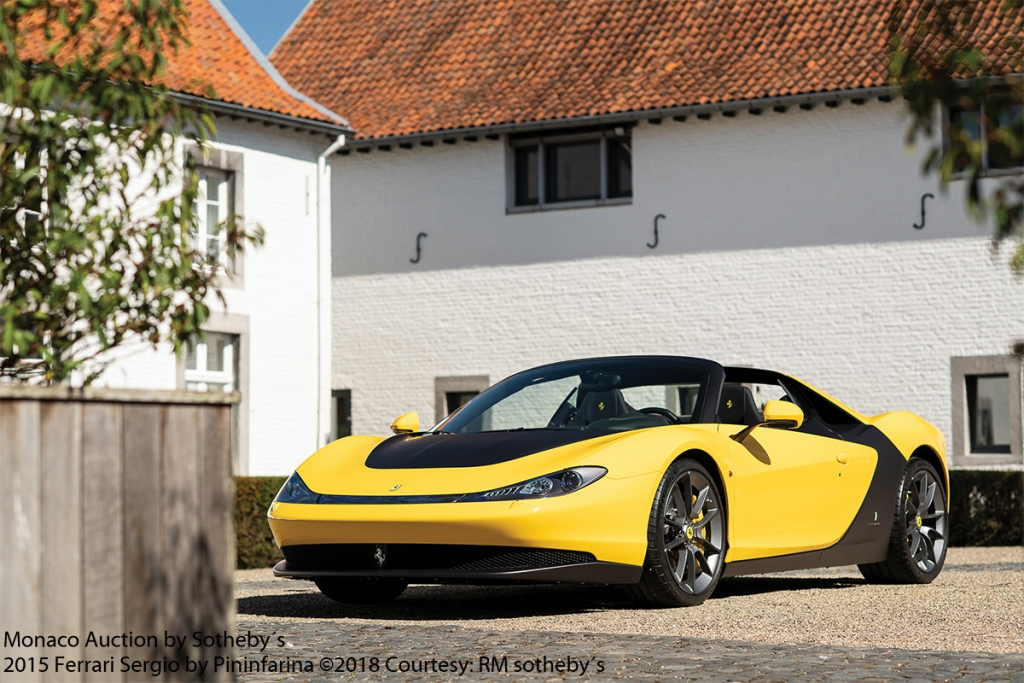 Last month, RM Sotheby’s announced the addition of a 1978 Ferrari 308 GTS – once owned by ex-F1 and Scuderia team driver Gilles Villeneuve – along with a 1992-season Benetton B192 F1 car and 1999 Jordan 199 Formula 1 car, making for a strong motorsport theme at the Monaco sale in May.For further information on RM Sotheby’s Monaco sale, to view an updated list of entries, or to register to bid, please visit www.rmsothebys.com. Interested bidders are invited to call RM Sotheby’s London office at +44 (0) 20 7851 7070 to speak with a car specialist.

Admission is open to the general public during public preview hours only. Admission to the auction on Saturday, 12 May, is for registered bidders, consignors, and qualified media only.

BIDDER REGISTRATION – €150
Bidder registration includes an official auction catalogue and admission for one bidder and one guest to the auction.