The ex-Ayrton Senna, record-setting, final Monaco Grand Prix-winning, 1993 McLaren-Ford MP4/8A Formula 1 racing single-seater is to be offered at Bonhams Monaco sale on 11 May. 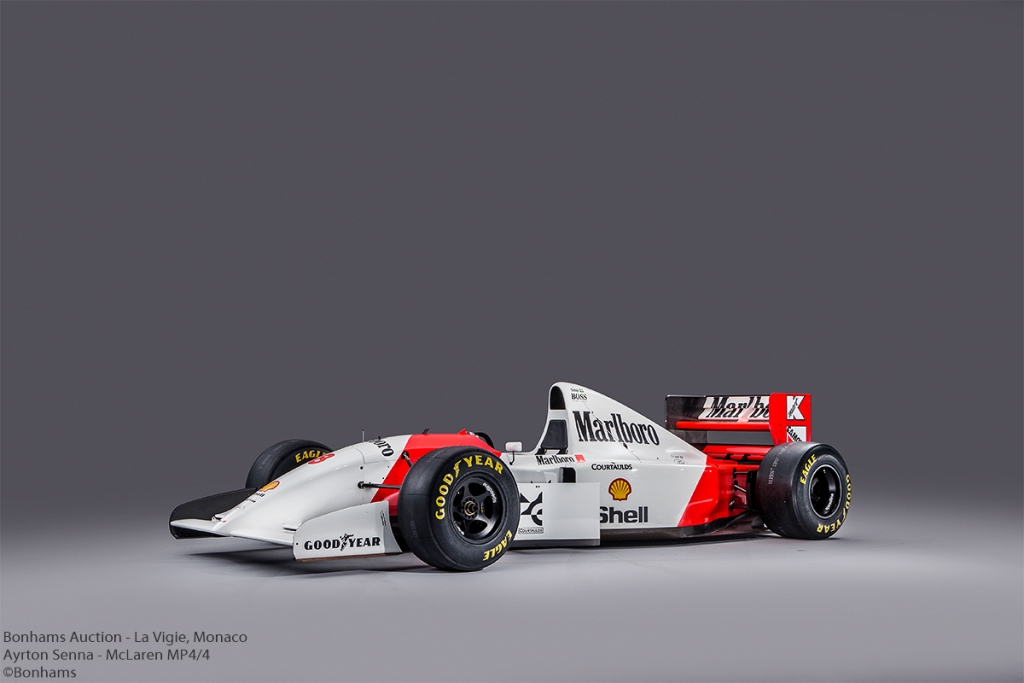 This startlingly well-preserved, running-order Formula 1 car won the 1993 Monaco Grand Prix – 25 years ago – in the hands of the legendary Ayrton Senna. The Brazilian three-time Formula 1 World Champion Driver, rated by many as the greatest of all time, won a record six editions of the prestigious round-the-houses Monaco Grand Prix.

The 1993 season was Senna’s last with McLaren. The great team had just ended its long and successful partnership with Honda for engine supply, and would link up with Peugeot in a new Formula 1 racing partnership from 1994. For the interim 1993 season, a last-minute agreement had been struck with Ford to run their Cosworth-built ‚HB‘ V8 engines on loan. Ayrton Senna was initially sceptical that these compact Ford V8 engines would be able to compete with the dominant Renault V10s as deployed by the Williams team, led by the Brazilian’s former team-mate and deadly rival Alain Prost.

Senna consented to remain with McLaren on a race-by-race basis, in return for a rumoured $1-million fee for every start. However, the team’s latest McLaren-Ford MP4/8A model – like chassis ‚6‘ now being offered by Bonhams – demonstrated such technological and mechanical sophistication that by season’s end, it was one of the most competitive of all contemporary Grand Prix car designs. 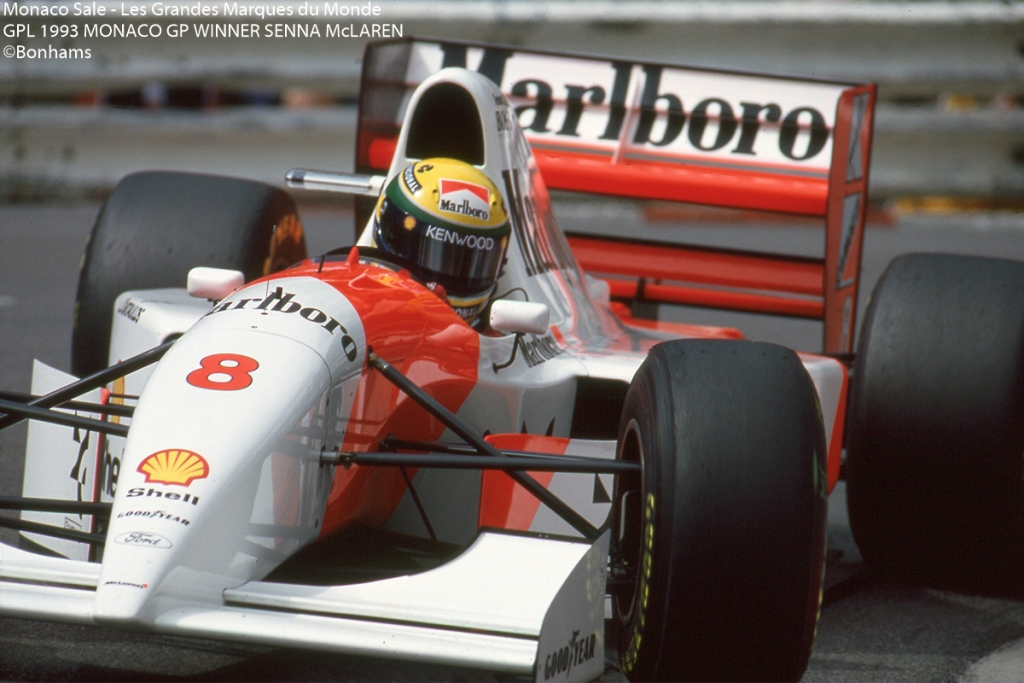 For the following Monaco Grand Prix, he experienced an apparent problem with the car’s ultra-modern ‚active‘ suspension system which sparked a violent crash into the barriers at Ste Devote corner.

The incident unfolded so suddenly that even Senna was unable to let go of the steering wheel in time, and the impact painfully injured his thumb. Chassis ‚6‘ was then repaired in time for Saturday running, and he qualified third fastest behind Prost’s Williams-Renault on pole and Michael Schumacher’s Benetton-Ford second. Prost then jumped the start, incurring a 10-second stop-go penalty, to be served in the pit lane. Schumacher then led the race from Senna until lap 33, when the Benetton-Ford retired with hydraulic failure. Senna promptly took control of the great race, 15 seconds ahead of Damon Hill’s Williams-Renault. As the great Brazilian took the Monaco chequered flag for his sixth time, he broke Graham Hill’s record for the most Monaco GP victories, set back in 1969.

This McLaren MP4/8A was raced again by Senna in that year’s Canadian, French, British, German, Belgian and Italian GPs, finishing 4th at Magny-Cours (France), Hockenheim (Germany) and Spa-Francorchamps (Belgium). At Silverstone in the British GP, Senna looked set to finish 3rd, only to run out of fuel in the closing stages – being classified 5th. Chassis ‚6’s frontline career was then completed as spare car at both the 1993 Japanese and Australian Grands Prix.

‚Ayrton Senna was the most charismatic Grand Prix car driver of the modern era, and the MP4/8A was the car with which his team, McLaren, surpassed Ferrari as the most successful team in Formula 1 World Championship history. This particular chassis, number 6, cemented Senna’s legend as The Master of Monaco. We at Bonhams are both honoured and thrilled to be presenting one of the most significant Grand Prix cars of all time. It is his Monaco winner, it is a runner, and now it could be yours.‘ 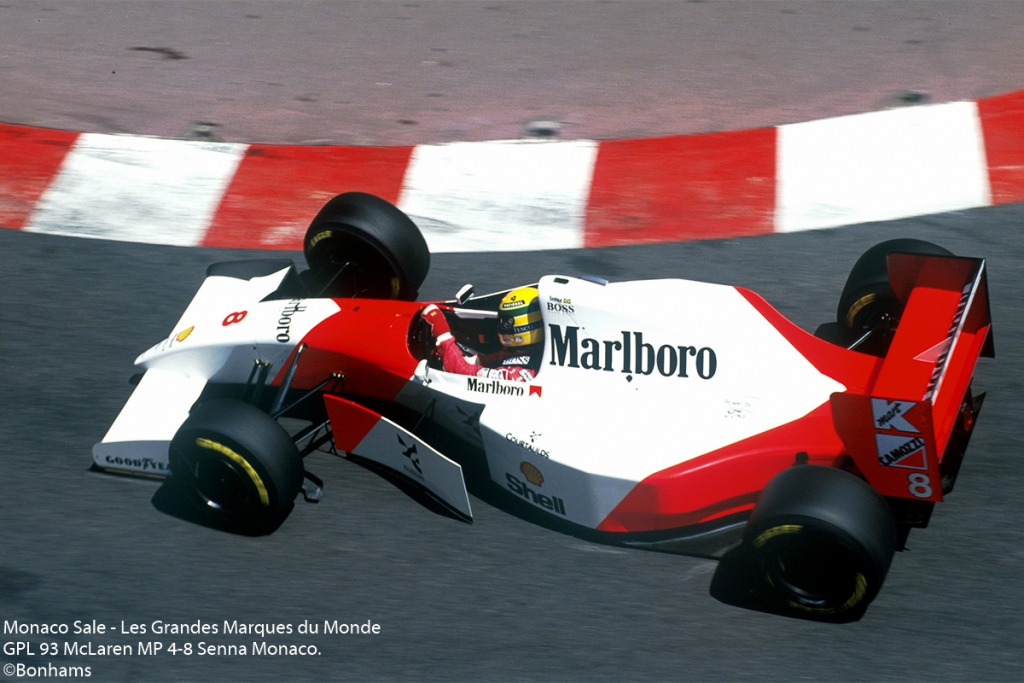 Bonhams is delighted to offer this iconic ex-Ayrton Senna, Monaco Grand Prix-winning Formula 1 McLaren-Ford upon the 25th anniversary of its record-breaking Monte Carlo victory. With this success, McLaren toppled Ferrari from its throne as contemporarily the most successful marque in World Championship Grand Prix racing. Yet another landmark achievement for this wonderfully iconic, magically charismatic, truly historic racing car.

Bonhams is delighted to announce that it has added a highly important and remarkably rare Ferrari to its roster for Les Grandes Marques du Monde à Monaco sale on 11 May at Villa La Vigie, Monaco Beach. 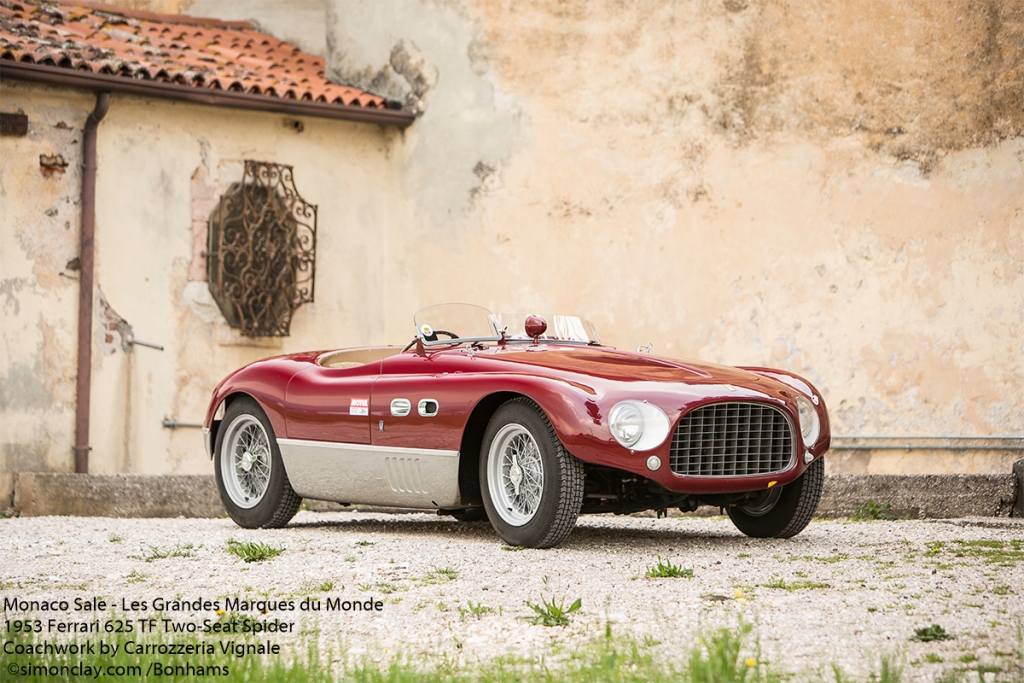 The ex-works, ex-Mike Hawthorn, ex-Umberto Maglioli, ex-Luis Milan 1953 Ferrari 625 Targa Florio two-seat spider by Carrozzeria Vignale (€4,500,000-6,500,000) is one of only three of the 2.5-litre, 4-cylinder twin-overhead camshaft 625 Targa Florio cars to have been built. For some reason, the car was never favoured by the notoriously selective Enzo, and he never showed enthusiasm for the Autodromo bodywork. The legendary Alfredo Vignale was thus commissioned to rebody the chassis, and a beautiful, ultra-compact spider was duly created.

Its debut was at the final practice session for the Grand Prix dell’Autodromo at Monza, an appearance that was slightly delayed due to the fac that its allotted driver, the legendary Mike Hawthorn, had been held up at the Rouen Grand Prix campaigning a works 625F1 single-seater. Hawthorn, although tired from his outing at Rouen, performed admirably in the car and finished fourth in both the first and second heat.

Following the race, the Vignale spider underwent some remodelling, believed to be the work of none other than Scaglietti. The radiator grille was significantly reduced, a modification that the car’s unmistakable front end retains to this day. In its new guise, the car was entered in the Coppa d’Oro delle Dolomiti, entrusted this time to Umberto Maglioli, a participant in 10 Formula One World Championship Grand Prix and winner of the gruelling Carrera Panamericana in 1954.

Not everyone was happy with Enzo’s choice of Maglioli, as his team-mate Paolo Marzotto recalled: ‚I tried the 4-cylinder and had no doubt that it could be the car to win…it was light, agile and with enormous torque, it was the ideal car. I said to Ferrari that I intended to compete with it, but there was no way of convincing him. He insisted I raced the twelve. I said, ‚As you like…I’ll take the lead, I’ll stop 10 metres from the finish line and I’ll let Taruffi pass me.’Enzo called Marzotto’s bluff and stood his ground, knowing that no driver could ever really give up a victory out of sheer stubbornness. Marzotto took the victory in the 250MM Vignale spider, Piero Taruffi came in second in his Lancia D20 and Maglioli was third.Following its Italian racing career, the car passed through 5 South American owners in Brazil and Argentina, where it competed in famously tricky races such as the 1000kms de Buenos Aires (five times) and the 500 Miles of Argentina. In the mid 1960s, the car exchanged in part for a Ferrari 250GT and sent to Italy where it remained, unloved, until 1974 when it was discovered by Franco Lombardi in a scrapyard in Naples. 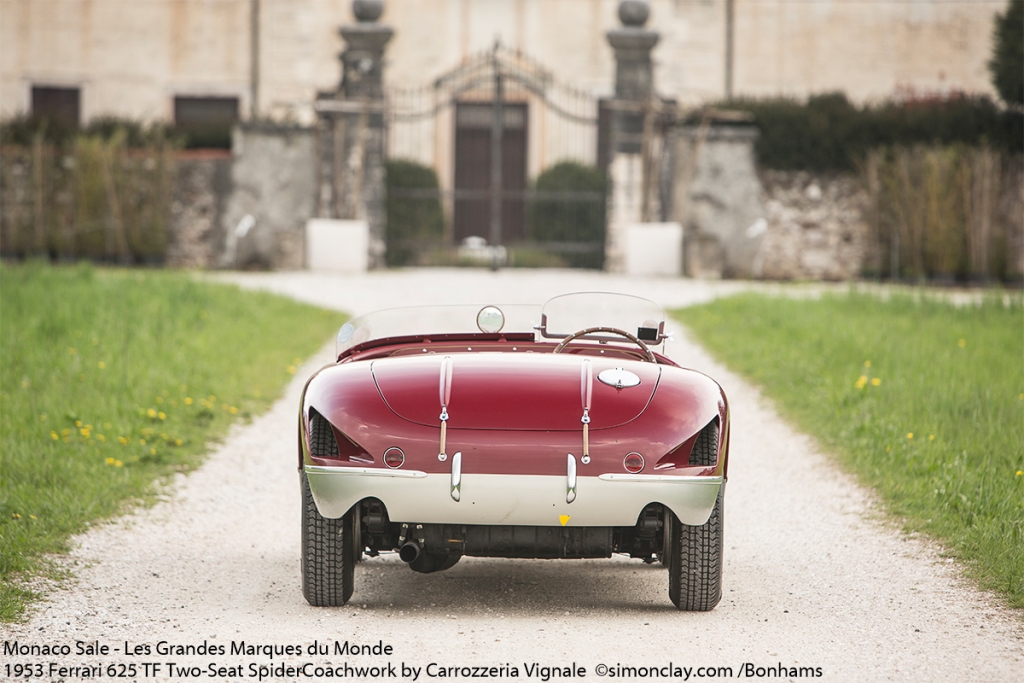 The car was sent to Modena by its new owner and underwent a complete restoration in preparation for the Mille Miglia, a race that the car successfully entered four times in 1984, 1986, 1989 and 1990. In 2006, it was raced by its current owner at the legendary Monaco Historic Grand Prix having been once again restored, this time by Carrozzeria Nova Rinascente near Padova.This is a racing car par excellence: ex-works, driven by one of the most celebrated British racing drivers of all time, and fastidiously restored. It is eligible for the most glamorous and exciting motoring events across the globe and, as Maglioli himself claimed, ‚it is suitable for even the most tortuous routes.‘ 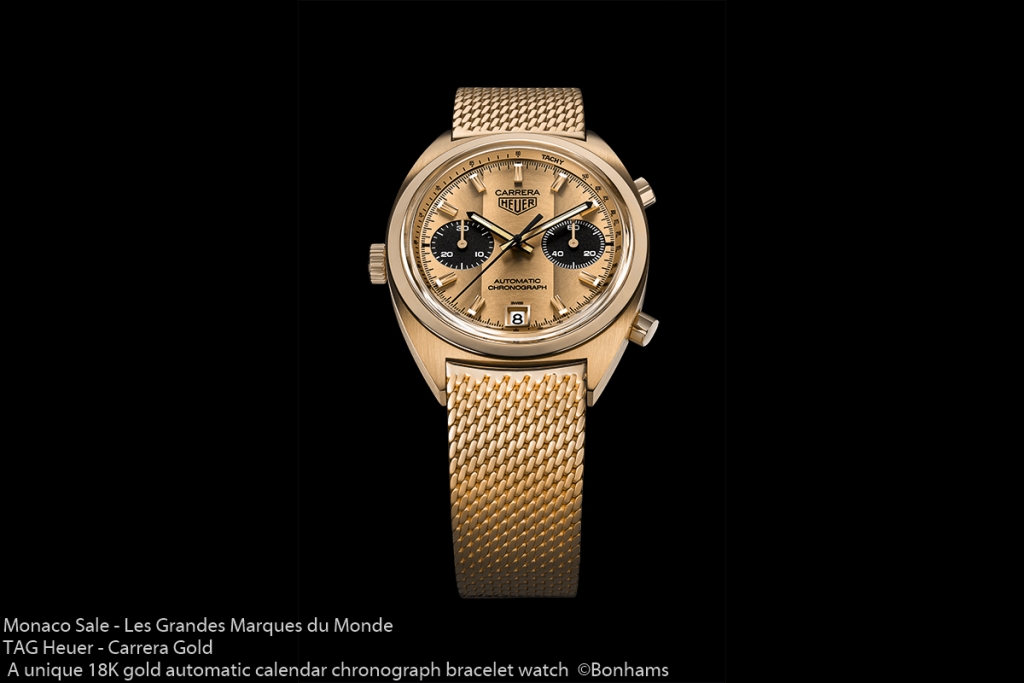 In 1972, Ronnie ‚SuperSwede‘ Peterson was presented with a watch by Jack Heuer, at the 1972 German Grand Prix. The watch, an 18k solid gold Carrera chronograph, was inscribed on the back ‚Success. Ronnie Peterson from Jack W Heuer.‘

The original watch is now on display in the TAG Heuer Museum in La Chaux-de-Fonds, but to commemorate the 40th anniversary since Peterson’s death, Heuer has created a re-edition of the watch – the only one in existence. The 1158CHN bracelet watch is one of the most desirable and sought-after in the motoring world- it is even nicknamed Montre de Pilote, or Driver’s Watch.

It is being offered, in the presence of Ronnie’s daughter Nina, in aid of the Ronnie Peterson Memorial Foundation, a charity that supports promising young drivers in his native Sweden. The sale also includes the car that launched Peterson’s career on to the international stage, the 1969 Tecno-Novamotor Ford 69 Formula 3 Single Seater. The car won 16 races at the hands of the SuperSwede, including the 1969 Monaco Formula 3 GP.

This is a once-in-a-lifetime chance to own the quintessential driver’s timepiece, offered in the very place where the legendary gentleman driver made his name. 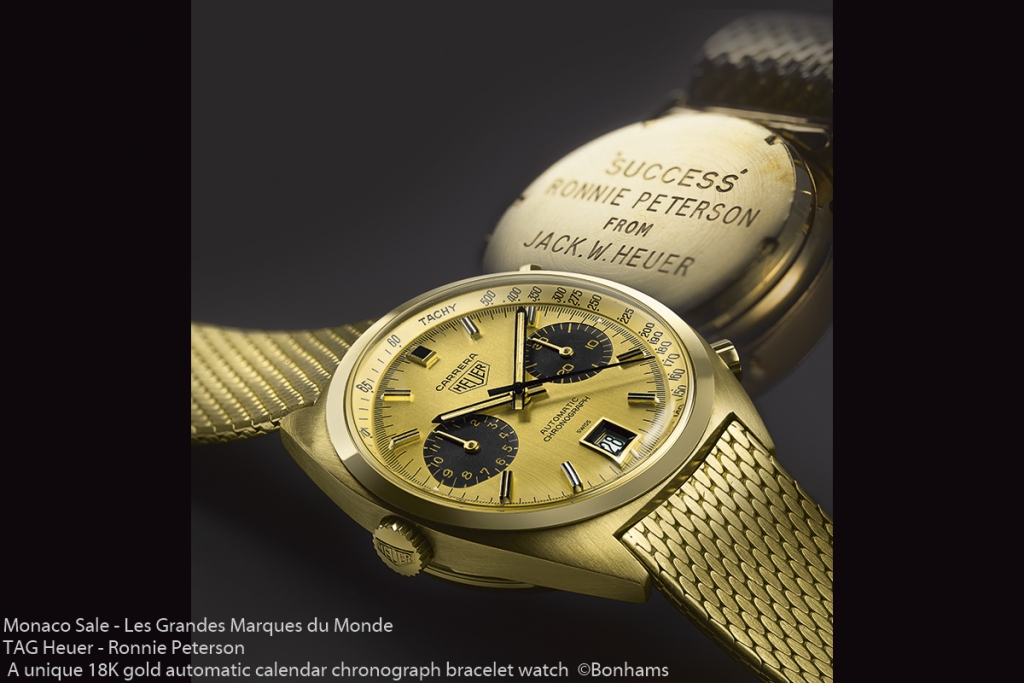 Case: Brushed and polished tonneau form, screw down back, crown at 9, twin fluted chronograph pushers at 2 and 4, engraving to back ‚SUCCESS RONNIE PETERSON FROM JACK.W.HEUER‘ 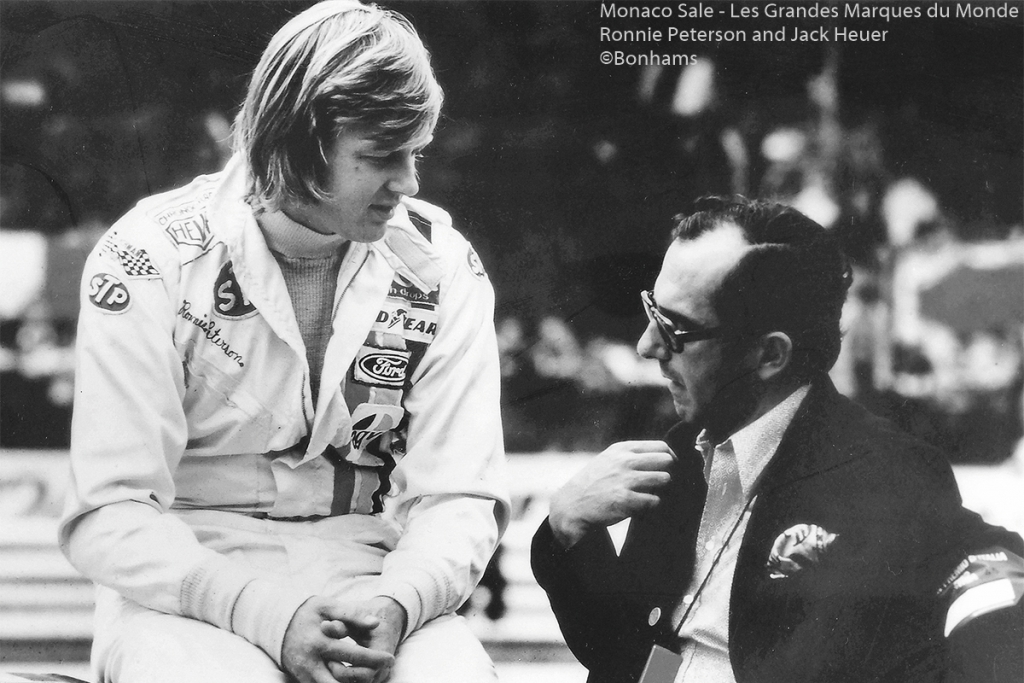