Sigurdur Gudmundsson (b. 1942) lives and works in Xiamen, China. He studied in the 1960s at the Icelandic College of Arts and Crafts and the Academie ’63 in Haarlem in The Netherlands. Mayor solo exhibitions include shows at the Baltic, Gateshead (2003), Malmö Konsthall (1992), Kunsthalle zu Kiel (1993) and several shows at the National Gallery of Iceland and Reykjavik Art Museum. Recent group shows include The Imminence of Poetics, Thirtieth Bienal de São Paulo, Brazil and Ends of the Earth – Land Art to 1974 at The Museum of Contemporary Art, Los Angeles and Haus der Kunst, Munich.

Many of Sigurdur´s works are in the collections of museums throughout Europe and he has made a number of public sculptures located in the Nordic Countries and Central Europe.

Gudmundsson’s idiosyncratic work is difficult to separate from the energetic and witty artist himself. His art has been based on a non-hierarchical flow between photographic works, sculptures, performances and ´visual poems´. His photo-works from the seventies, often collectively referred to as Situations are characterized by playfulness and humor. They represent human existence and classic ideas of philosophy and art through one man’s interactions with his surroundings. Many of these pieces such as Event (1975), Dancing Horizon (1977), and Mountain (1980–82) – have become icons of contemporary European art history. They have been showcased in numerous international exhibitions, and many of them can be found in public collections in Europe, the United States, and elsewhere.

In his diverse and prolific career Gudmundsson has persistently applied new methods and ideas by way of unaffected and personal approach. In addition to his art practice Sigurdur has also published three novels. 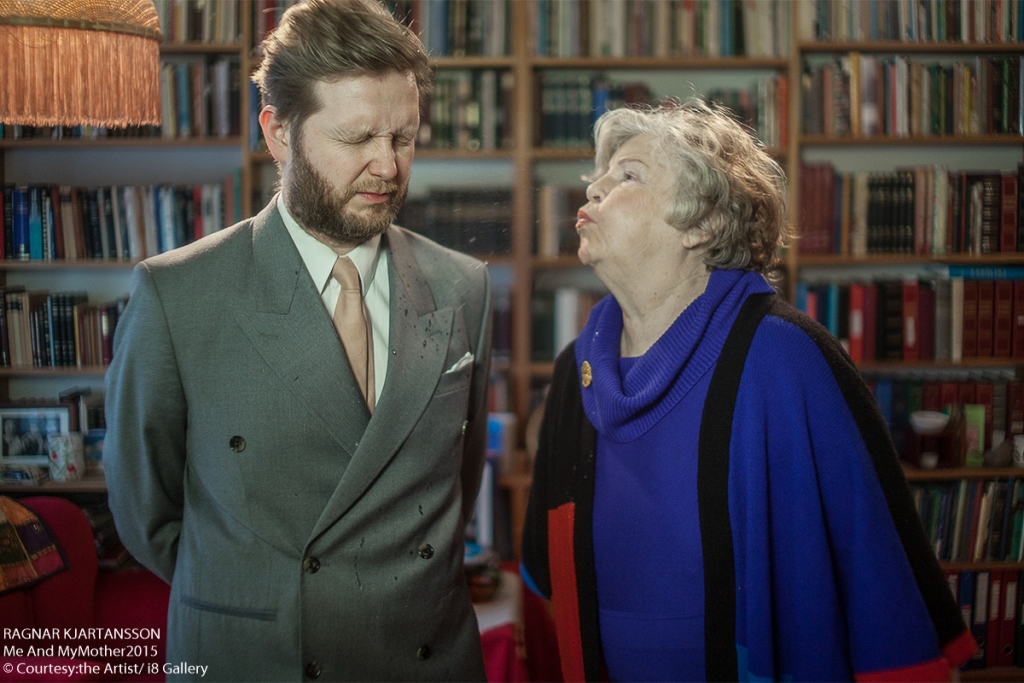 Ragnar Kjartansson (RAG-ner kuh-YART-un-sun) (born 1976 in Reykjavík) is a contemporary Icelandic artist who engages multiple artistic mediums throughout his performative practice. The artist’s video installations, performances, drawings, and paintings incorporate the history of film, music, visual culture, and literature. His works are connected through their pathos and humor, with each deeply influenced by the comedy and tragedy of classical theater. Kjartansson’s use of durational, repetitive performance to harness collective emotion is a hallmark of his practice and recurs throughout his work. Ragnar Kjartansson, lives and works in Reykjavík, Iceland. He studied at the Iceland Academy of the Arts and at The Royal Institute of Art in Stockholm.

Kjartansson has exhibited widely around Europe and the US, most recently at the Hirshhorn Museum and Sculpture Center in Washington DC and at The Barbican Centre, London.

Kjartansson draws on the entire arc of art in his performative practice. The history of film, music, theatre, visual culture and literature finds its way into his video installations, durational performances, drawing and painting. Pretending and staging become key tools in the artist’s attempt to convey sincere emotion and offering a genuine experience to the audience. Kjartansson’s playful work is full of unique moments where a conflict of the dramatic and the banal culminates in a memorable way.