“All those times I hit rock bottom, I always managed to bounce back. Sure, I had to love life a lot…”

In Il était un piano noir, her unfinished autobiography published in 1997, a year after her death, the singer Barbara tells with modesty and poetry of her childhood stolen by incest and by the occupation, of her bohemian years in Belgium, and of her early career in Parisian cabarets. She writes about the dream that haunted her throughout her life: to sing, write, compose, and be onstage with an audience, her “most beautiful love story.” Those pages, among other sources, are at the heart of the story for voice and piano imagined by Juliette Binoche and Alexandre Tharaud. The singer’s writings mix with the performers‘ memories of her, using the texts and songs, from the most famous to the most secret, to create a sensorial landscape. A pen and a piano that celebrate life, love, pain, anger, but above all else hope, which, even at its darkest and most desperate, forever remained the vibrant engine driving this icon, who Juliette Binoche says was able to turn “her shadows into light, her dark velvets into suns.”

The final words of Gérard Depardieu’s last show this past winter, in which he thanked Barbara for “her consoling words,” made me realise how she managed to bare all, to help us live thanks to this brave face to face she had with herself. When, at the end of her unfinished book, Il était un piano noir [Once there was a black piano], she writes: “Yet, in spite of my isolation, in spite of the long period of mourning I’d only just started, at the end of my beautiful and intense life as a nomad, I was a happy woman,” she tells us that she had to earn that happiness. Her shadows became light, her dark velvets became suns. To live somehow is that return from the deepest, most intense black.

The title of the show: “Le Mal de vivre” 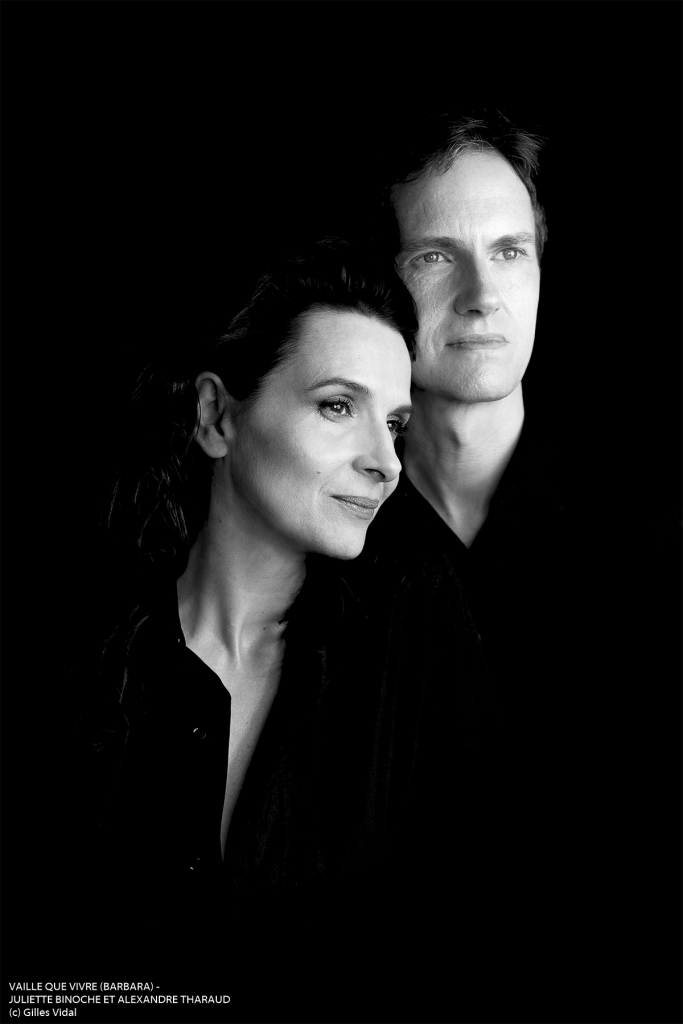 Juliette Binoche
Born in a family of artists (her father was a sculptor and her mother an actress), Juliette Binoche is an actress, a dancer, and a painter. She came to fame in the 1980s thanks to her performance in films by André Téchiné, Jean-Luc Godard, Philip Kaufman, or Leos Carax. Since then, she has inspired the greatest French and international directors, from Claire Denis to David Cronenberg and Abbas Kiarostami. She is one of only a handful of French actresses to have won an Oscar, and the first actress to have won an acting award in the three greatest film festivals: Cannes, Venice, and Berlin. Her performance in Krizstof Kieslowski’s Three Colours: Blue won her the César for best actress. On the stage, she has received acclaim for her performances in shows by Ivo van Hove, Andrei Konchalovsky, Akram Khan, or Frédéric Fisbach, with whom she appeared during the 65th edition of the Festival d’Avignon.

Alexandre Tharaud
Alexandre Tharaud started leaning the piano at age 5, at the conservatory of the 14th arrondissement in Paris, where he trained with Carmen Taccon-Devenat, who taught him to “breathe with his instrument.” An internationally renowned pianist, he has recorded works from wildly different eras (Couperin, Bach, Chopin, Ravel, Satie, Thierry Pécou). In 2009, the Minister for Culture named him Chevalier de l’Ordre des Arts et des Lettres. His passionate eclecticism has led him to work with various other great artists, such as director Bartabas, actor François Morel, or filmmaker Michael Haneka. In 2017, he published his first book, Montrez-moi vos mains (Show Me Your Hands).