1-54 Launches its inagural Edition in Marrakesch, Morocco from the 24th to the 25th of February 2018 at La Mamounia. 1-54 Marrakech 2018 will welcome 17 leading galleries from Africa and around the world, with over 60 international artists and feature an ambitious program of talks and events in partnership with local institutions.

Hassan Darsi was born in Casablanca in 1961 where he lives and works. After his studies at the Higher School of Fine Arts in Mons (Belgium), he returned to Morocco in 1989. Hassan Darsi’s artwork is highly influenced by his life, his everyday life, his environment. In 1995 he founded La source du Lion in Casablanca carrifying a significant participative approach. Likewise, The Hermitage Park project, developed in the form of “artistic bridges” from 2002 to 2008, marked the beginning of a series of actions and projects engaged with questions about the city, architecture and public spaces. Until now he participated in numerous international exhibitions in art centers, museums and biennales: Senegal, South Africa, Lebanon, Spain, France, Germany, the United States, Czechoslovakia, Holland, Belgium and Morocco. His pieces are on view in public and private collections in Morocco and abroad : “Le Projet de la Maquette” was acquired by the Centre Pompidou in Paris, and the the ambitious work Le Square d’en Bas is currently exhibited at MuCem Museum in Marseille.

Born in 1953, Abdoulaye Konatè first studied painting at the National Institute of Arts in Bamako. When he later moved to Cuba (1978-1985) he met the artist Wilfredo Lam, who brightly asked him: “Why are you coming here to show me what you have done in Cuba, when you have everything you need at home?”.

At the comeback in Mali, Abdoulaye embrace the suggestion: he left painting in favour of textile cotton as expressive medium. 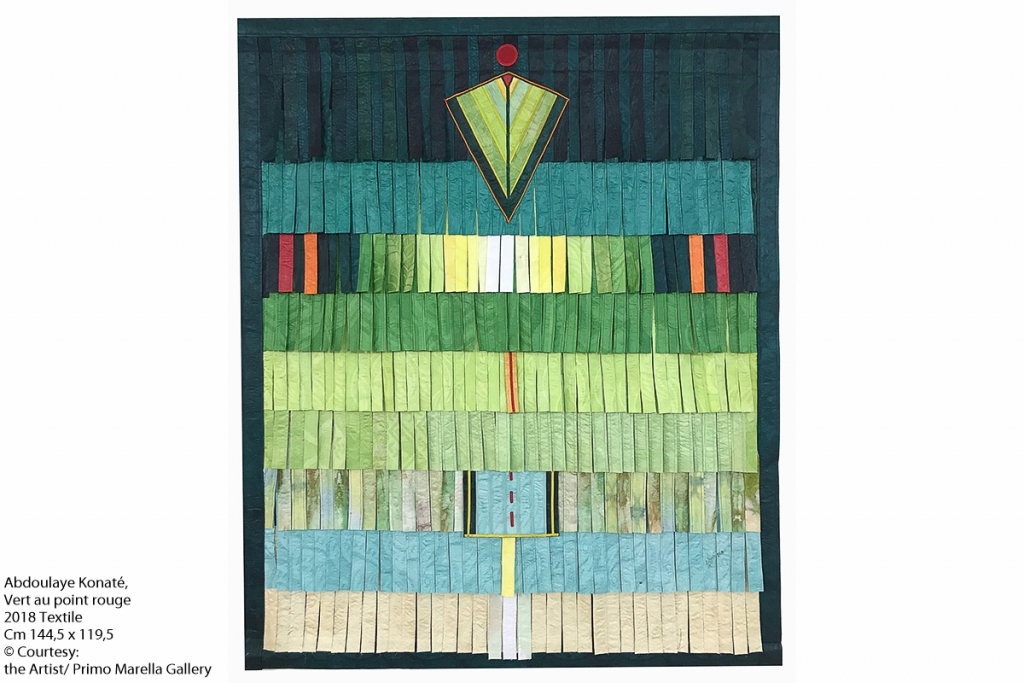 This kind of liguistic choice is linked to an active effort towards knowledge: cotton stripes, weaved and embroided, become his signature. The exploration extends even to dyes and colours. On one side the artist developes the indigenous cotton tradition and on the other side he uses it, not with a decorative aim but, as a symbol and concept of his work. This feature can be interpretated as a commitment that the artist keep to recover not only his memory but also his country beliefs, matching handcraft tradition with the political world. Declaring himself interested in social relationships, both as internal in the society and in a family unit, Abdoulaye reinterprets strong political themes, like arabian-istraelian conflict; mines problem; Ruanda genocide and human rights.

During the years the artist has been interested also in issues about deforestation and natural environment. As proof of such a strong commitment, in 2008, Abdoulaye has been mentioned for the prize “Artes Mundi”, an honour for particular committed artist in social themes. Regarding his artistic investigation, Konatè says: “[…] In my art coexist two extremly different schools of thought: on one side there is the aesthetic, influenced by nature and cultural traditions of my country, which determines colours and materials used in my artwors. On the other side there is a more spiritual level borning from the will of investigate and describe human suffering, which could be found in countries’ relationships, politic, environment, society and in the family itself”.

Born in 1977 in Antananarivo (Madagascar), Andrianomearisoa is a versatile artist whose unique approach towards art results in mysterious and evolving works. Mixing materials, textiles and colors, the artist gives shape to the multifaceted human relationships and feelings and those pulses of life he captures from urban space. Smells, noises, lights, images and all the incessant movements that generate city life compose his universe without imprisoning him in a specific geographical space. 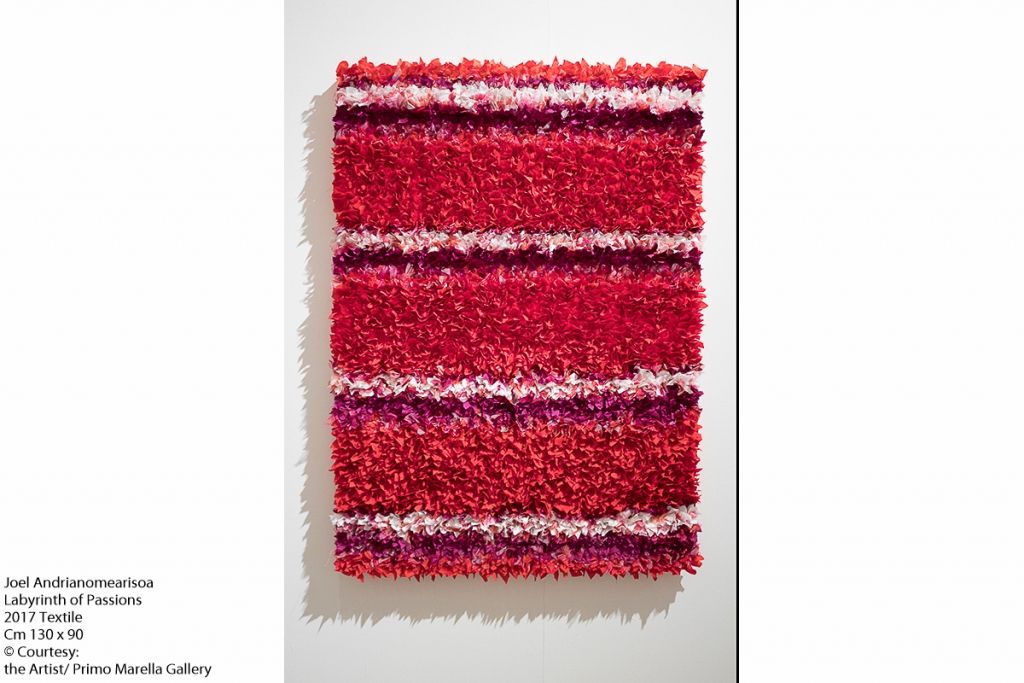 His works show a combination of opposing forces and ambivalent movements of affirmation and negation, always conveying a sense of fragility. Although Andrianomearisoa does not usually imagine the finality of his installations, he aims to take the viewer to an unexpected, surprising place. Constantly reinterpreted and renewed, his artworks experiment every possibility in order to create new languages: the monochrome is continuously challenged because “this is when artwork makes sense” as he declared.

Being at the same time one and thousand colors, his omnipresent black is a permanent challenge that urges the artist to reinterpret and renew the color unceasingly. Depending on the material as well as lighting angle, his blackness unfolds in endless nuance. “For me it is a challenge. In every piece, I have to find various colors, different postures of black”, says the artist. It is not just a color to him, but also an attitude toward the world. Black is enthralling, sometimes disturbing, but it makes sense everywhere, giving the artist the freedom to deconstruct and disintegrate the structure of the work.

The current project is a reflection on a desire, a sentimental desire towards the geographic longing of Madagascar. Surrounded by a feeling of melancholy, the exhibition displays a series of works of various dimensions and materials. They create a detailed path from black to white and red, combined in many different ways, in order to represent the deepest emotions arising from the India song. The show is divided into three parts: “Forgotten name/Forgotten Love”, “Chanson de ma terre lointaine” and “All and nothing”, that represent Andrianomearisoa’s attempts to carry out a “retour dans le passé, action du présent, esquisse du futur”.

I am a visual artist today. I had to take a different path to get where I am. At the beginning, I was wondering why it took me so long to finally become my real me. Finally, I understood that each step was very important, and each “different life” has given me an important part of me.

I first started by studying architecture, which was a childhood dream. I’m very involved with the volumes, spaces and the way we approach and live inside of buildings. I can feel very disturb, if I think a wall should be elsewhere…

Then, I opened an embroidery studio, where I was working with artisans during several years. Textile and embroideries have always been a big passion for me. To have my own atelier was a realachievement. I learned so much, surrounded by great artisans. I’m very lucky to have been born in a country where that art form is magnificent. Morocco has so many ways to work with silk. And this art is still alive and very popular. Usually the artisans are very specialized , it is hard to make them do something a bit different from what they are used to. I have developed a very good relationship with a few of them, and I love working with them. We are very complementary. I try to use their millenary expertise to realise my very contemporary ideas.

Working with waste is the newest part in my work. I am fascinated by the universality of that material. 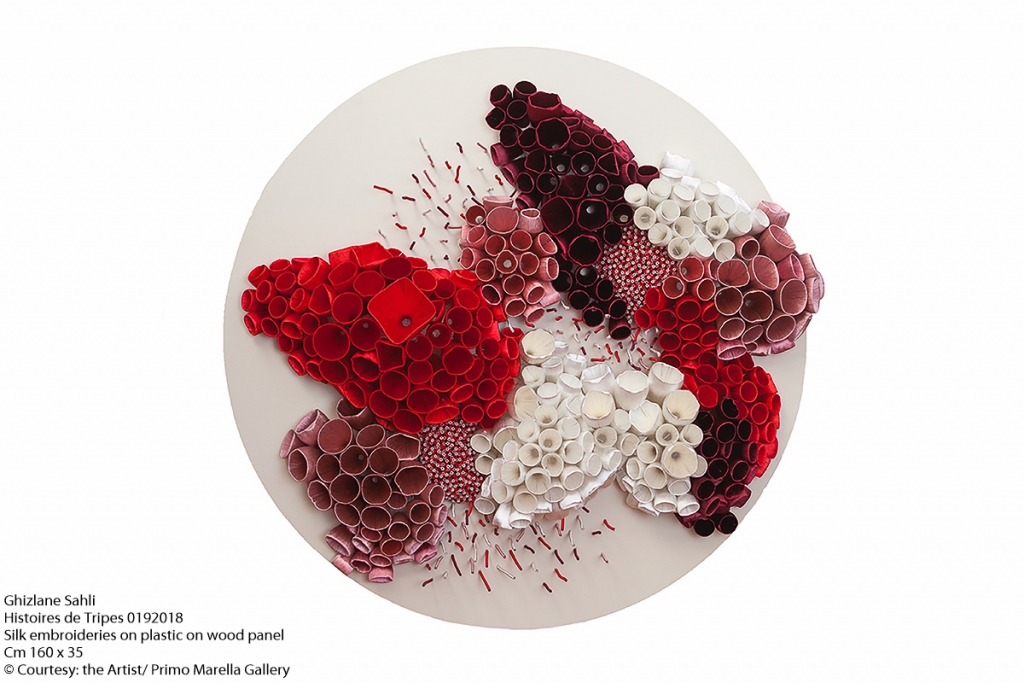 I always have this idea in mind: A big hand taking the human body and shaking it to clean it from all the “pollution” received by religion, education, culture, gender… And keep just the very inner and wild part of it. This is how I imagine my work. Just the inner part. The emotions. To transform the matter that is supposed to end up as the worst part of humanity: waste, and to give it a second life as a piece of art full of emotions, is a real challenge for me.

While I work with waste, I always think of its previous life, and its energy. My work is very organic. It grows like cells. Each alveoli (bottle covered with silk) is a cell. Every alveoli is created by itself, then they are put together and they accumulate by knotting on a matrix (the mesh) to form the artwork. The essence of this work is created by the addition of all the energy of each alveoli. It is not a controlled work.

Being part of the African contemporary art fair, is a real confrontation for me. I don’t like to be con fined in a group of people considering just one part of what they are. I see myself as a human being and citizen of the world. But even so, I was born in Morocco! I’m half Spanish and I have a very big spiritual connection with Asia. But I have never felt African. I am very intrigued about how 1.54 art fair made me really think about my African part. It is really interesting because suddenly I realised that I belong to that big and beautiful continent, Africa. I am very excited about that new me and I hope that my future works will consider that new part of me.