Miami Beach. On the evening of December 6, Amsterdam based Studio Drift, Lonneke Gordijn and Ralph Nauta, presented their latest work “FRANCHISE FREEDOM – a flying sculpture by Studio Drift in partnership with BMW” to an audience of hundreds of stunned guests and astonished onlookers. On the occasion of Art Basel Miami Beach, 300 illuminated drones moved across the sky above the ocean mimicking a flock of birds and creating a performative artwork at the interface between technology, science, and art. 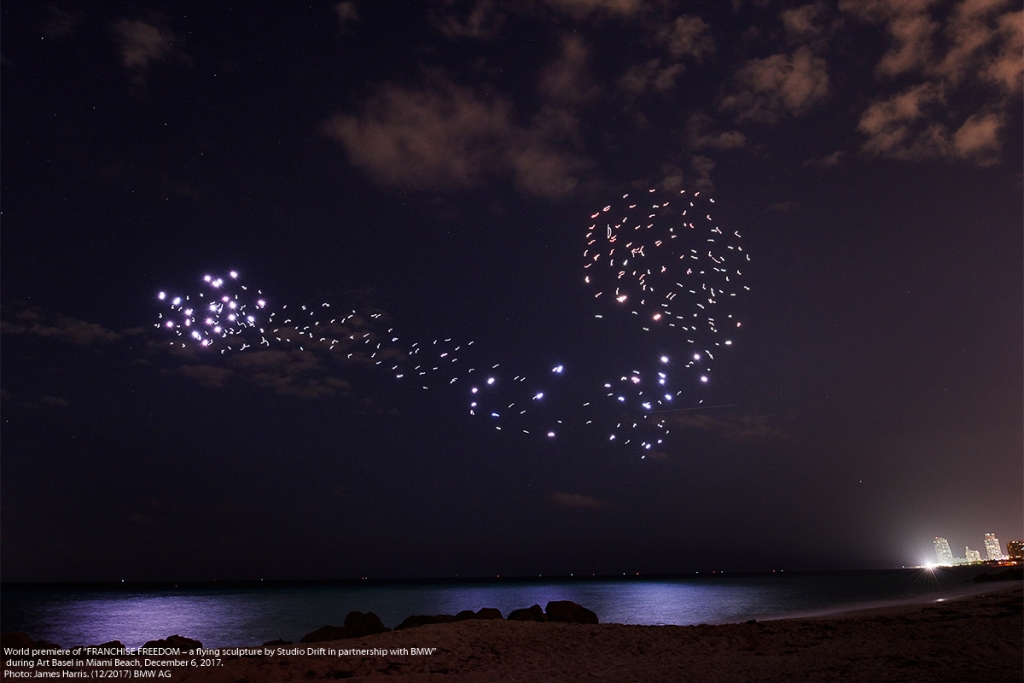 Everything can be simulated in animation and virtual reality, but we think there is an importance in creating real experiences that you can feel and see with your own eyes in the real world, not only through a screen”, says Lonneke Gordijn, co-founder of Studio Drift, Amsterdam, about the general mind set and approach of Studio Drift.

“This was a once in a lifetime pleasure to behold,” says Hildegard Wortmann, Senior Vice President Brand BMW. “It was Edmund Burke – in the middle of the 18th century within his well-known treatise on the sublime – who wrote of beauty as being a movement. This is what Studio Drift and Bayerische Motoren Werke both wholeheartedly subscribe to. ‘FRANCHISE FREEDOM’ is a technological wonder and a breathtaking aesthetic experience.”

In celebration of Art Basel in Miami Beach 2017, Studio Drift, BMW, Future\Pace as well as Faena premiered “FRANCHISE FREEDOM”. By imitating the natural phenomenon of a swarm of birds, it is the first time for this orchestrated movement to be presented by machines working with decentralized algorithms at a very large scale. Additional shows weather permitting are planned nightly at 8 PM from Thursday to Sunday, December 7-10. The drones perform on the beach above the sea between 32nd and 33rd Street off Collins Avenue behind the Faena Hotel Miami Beach. 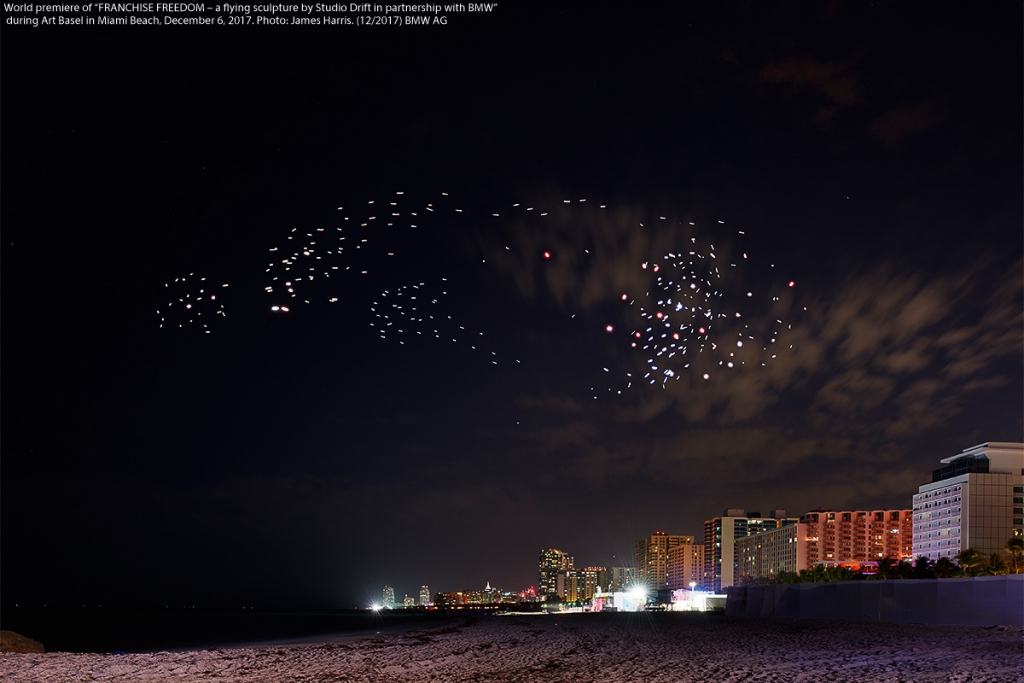 Studio Drift questions the delicate balance between the group and the individual. The sacrifice made by the individual subjecting to the group gives off the illusion of freedom, creating a never-ending cycle. To create “FRANCHISE FREEDOM”, Studio Drift studied the natural flight patterns of starlings and translated them into software that was specially developed and embedded in the drones. Their technology is based on ongoing university research on flocking behavior, as the principles of self-organization have become more and more relevant in our changing world.

BMW has a 50-year global track record of recognizing and enabling talent in the arts. The company makes artistic visions come true and honors the full creative freedom of any artist or institution they collaborate with. When Studio Drift sought a dialogue with BMW in regard to their ambitious project, the company, as long-term partner of Art Basel, could not pass on the challenge. For the period of over half a year, discussions ensued between BMW and Studio Drift – just as they did with artists like Jeff Koons, Olafur Eliasson, and Cao Fei before them.

While Studio Drift presented their latest artwork at the interface between science, art and technology, Bayerische Motoren Werke had one of their latest masterpieces on site: the BMW Concept 8 Series was on display for guests to see up close in the Faena Beach Dome on Decemer 6, 2017. The study car serves as a taster of a forthcoming BMW model – the BMW Concept 8 Series stands for new design ideas and form-building techniques, representing the pinnacle of sports performance and exclusivity at BMW and slated for launch in 2018 as part of the most ambitious model offensive in the company’s history.