Madragoa Gallery at ARCO -Madrid 2018,  presenting a dialogue between works by Renato Leotta and Buhlebezwe Siwani. (Pavillion 9, Booth OP05), and an important installation by Belén Uriel, Lama no Sapato, is on show in the Special Projects section.

Aventura (Thessaloniki) by Renato Leotta condensatea visual and sensorial experience of the sea in a object that is immediately perceived as acontainer. First of all, each one of the sculptures shows on its top the shape of the beach dunes that are obtained from the casts of portions of shore, made when the sea withdraws during the low tide: they reproduce the delicate, ephemeral forms of the sand and at the same time express a plastic strength due to a sculptural adherence to the physical surface of the landscape. In the mould, and then during the firing of the terracotta, fragments of shells are trapped in the circular or rectangular perimeters of the sculptures, as well as sand grains and glass. These sculptures are conceived as lids, each one for a different container, also made of terracotta in the shape of a vase or a box, equipped with a hole that turns it into an awkward musical instrument, from which you can hear the sound of the sea. Alle the works in the series, that started in occasion of the first solo show of the artist at the gallery in Lisbon, are named after some large city harbors, from Madeira to Venice. These containers with their uncommon covers seem just arrived from a trip or ready to leave for a new destination, ideally echoing the perpetual activity of the ocean, eroding from one side and building up to the other, producing a constant sound with its incessant activity.

Renato Leotta Multiverso (Luna Nouva) is part of a series of works where the artist set a relation to painting using the landscape itself, and time. 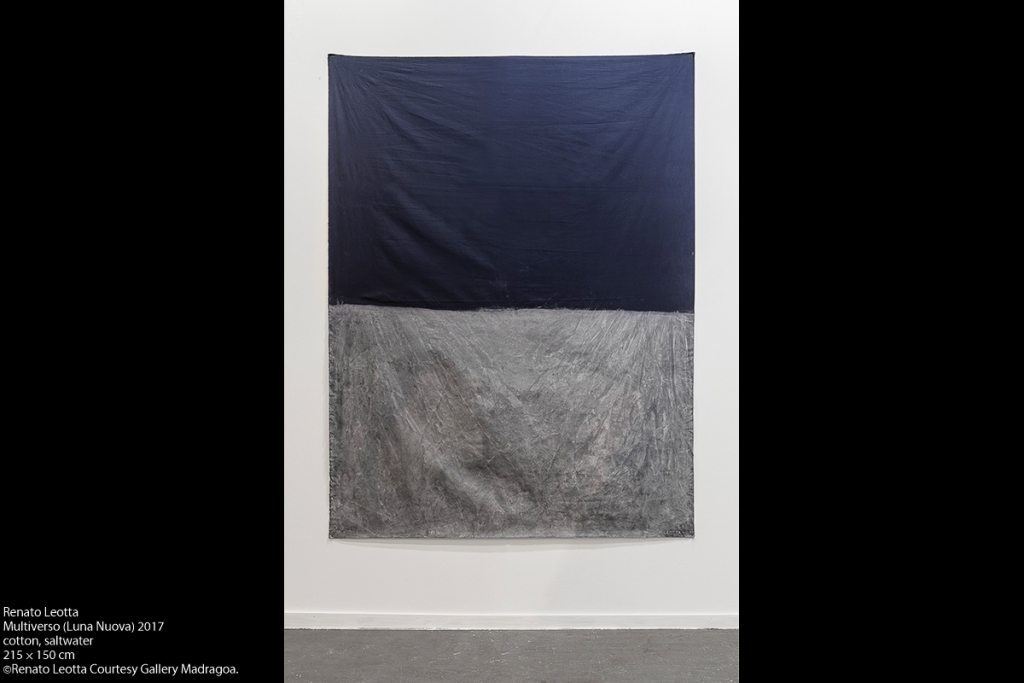 Buhlebezwe Siwani’s practice is deeply rooted in performance and strongely intertwined with her own biography and work as a Sangoma, a traditional South African healer or diviner. Her multilayered work is – although not literally – the documentation of a diverse set of performances. If art performances cannot completely reenact the ritual, through the use of objects and tools charged with symbolic power and animals, in conjunction with the execution of particular actions or gestures, they preserve traces of the ritual and still convey spiritual energies. In the series of photographs presented, the bowls depicted in which traces and residues of soap holy ashes appear are multimultifunctional objecs, used only by young women to bathe, wash clothing, store food. During her whole life, Buhlebezwe was always told to wash her body (as the women’s bodies are always supposed to  kept clean). The green soap is the one that in South Africa is used for many purposes: to cleanse one’s clothes but also one’s body and the digestive system, while the holy ashes are connected to a series of rituals. In addition to that, words connected to dirtiness and purity appear INTSENTE carved on the soap means “dirty”, while MSULWA written on the holy ashes means “pure, clear”. 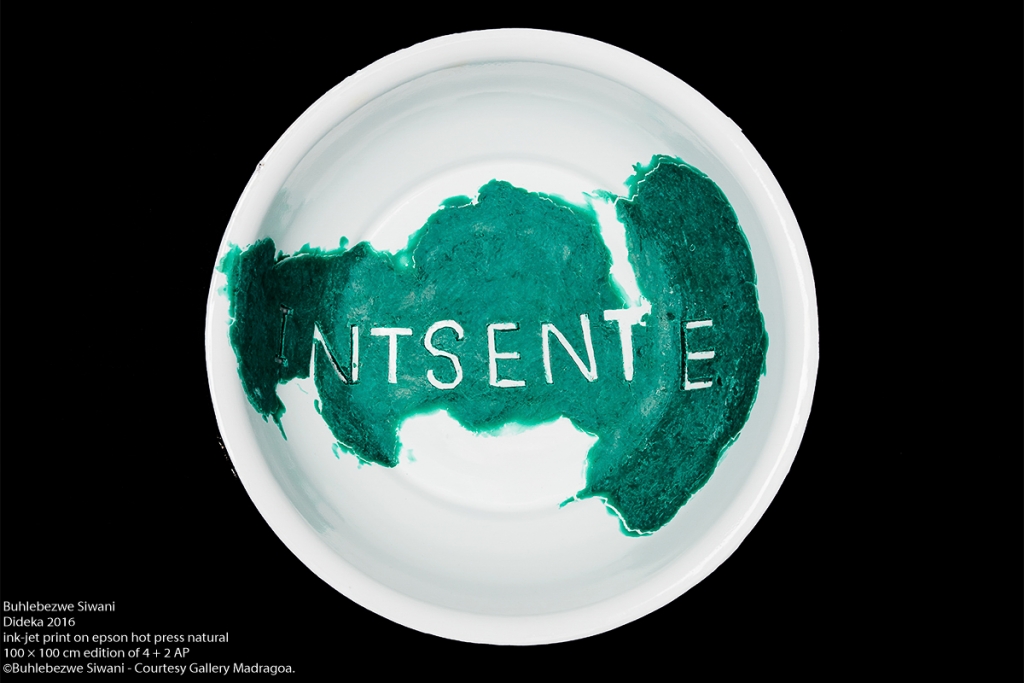 Buhlebezwe Siwani (Joannesburg, South Africa, 1987) completed her BAFA (Hons) at the Wits School of Arts in Johannesburg in 2011 and her MFA at the Michealis School of Fine Arts in 2015. She has exhibited at the Michaelis Galleries in Cape Town, a site-specific exhibition in collaboration with APEX Art, New York City, in 13th Avenue, Alexandra township, Commune 1, and Stevenson in Cape Town. More recent exhibitions include Imfazwe yenkaba at Madragoa, the Kalmar Art Museum in Sweden, The Louis Vuitton Foundation in Paris, and the Bienal de Coimbra, 2017. The collective iQhiya, of which Siwani is part, participated in Documenta 14, 201

As the recipient of The Audemars Piguet Prize, Belén Uriel presents a new monumental sculture in its dedicated space. 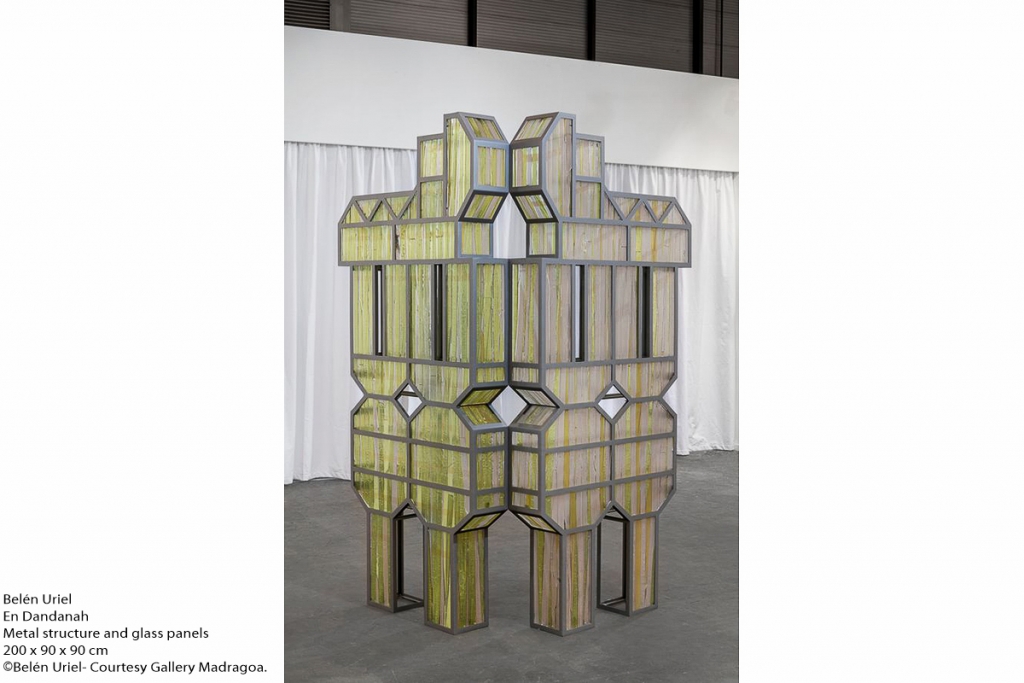 En Dandanah Winner of the Audemars Piguet Award for the Production of a Work of Art For the Audemars Piguet Award, Belén Uriel proposed to produce and show for the first time a monumental sculpture in glass and metal, titled En Dandanah that represents the peak of her ongoing research about a set of glass building blocks game designed by the architect Bruno Taut in 1920’s, named Dandanah, The Fairy Palace. Situated at the intersection of several discourses, the game crystallizes, literally and metaphorically, the utopian strand of Modern Design and Architecture we have inherited and expresses its complex and often self-contradictory nature. The artist is interested in the game as a source of enquiry because it proposes, through a domestic object and activity, an ample scope for exploring a range of ideas with respect to how social and cultural values are embedded in material manifestations. The project is focus on a sculptural exploration and research into how vocabularies of Abstract and Modern images are manifest in everyday life.

The Dandanah appears to be a unique case of a toy made of glass, a sui generis moment in the history of Design that incorporated the game as a channel for artistic experimentation. Invented by Blanche Mahlberg and designed by German architect Bruno Taut in 1920’s, the Dandanah, made of 62 glass pieces, is an object where technological and utopian discourses merge through the medium of coloured glass. Taut considered glass a potential agent of social change, a metaphor for purity, innocence and hope. This game realizes and epitomizes Taut’s utopian and mystical beliefs on a condensed, small-scale object and through a daily life act, that of play.

The project explores the unrealistic character of the Dandanah. Its usability as a toy is questionable: it was judged to be unsafe because of the fragile glass pieces and the different constructions, pictured in the six instructions sheets provided with the game like examples to be built, are impossible idealistic representations, an imaginary designs that cannot be constructed with the contents of the box. The sculpture is composed by a metal structure that hosts a number of specifically produced glass panels. Each glass panel has a texture that resemble the one of broken taped glass, but its in fact a single piece in reference to the fragility of the original game and its dubious usability. The clear glasses is either characterized by a dominance of the yellow or pink color, in reference
to sunset and sundown, referencing landscape and therefore conceptually and paradoxically inserting the sculpture into the realm of a real architecture. The final shape of the sculpture references directly one of the proposals made by Bruno Taut for a utopical construction to be builtwith the glass blocks of his game.

Through the rethinking of the functions of a sophisticated project that was designed to be a toy but revealed stronger conceptual complexity, the artist re-imagines the shapes that compose the precise proposals of Bruno Taut in sculptural terms. The fine philological research, as well as the construction quality will perfectly illustrate the values of complexity and precision that areat the core of this proyect. 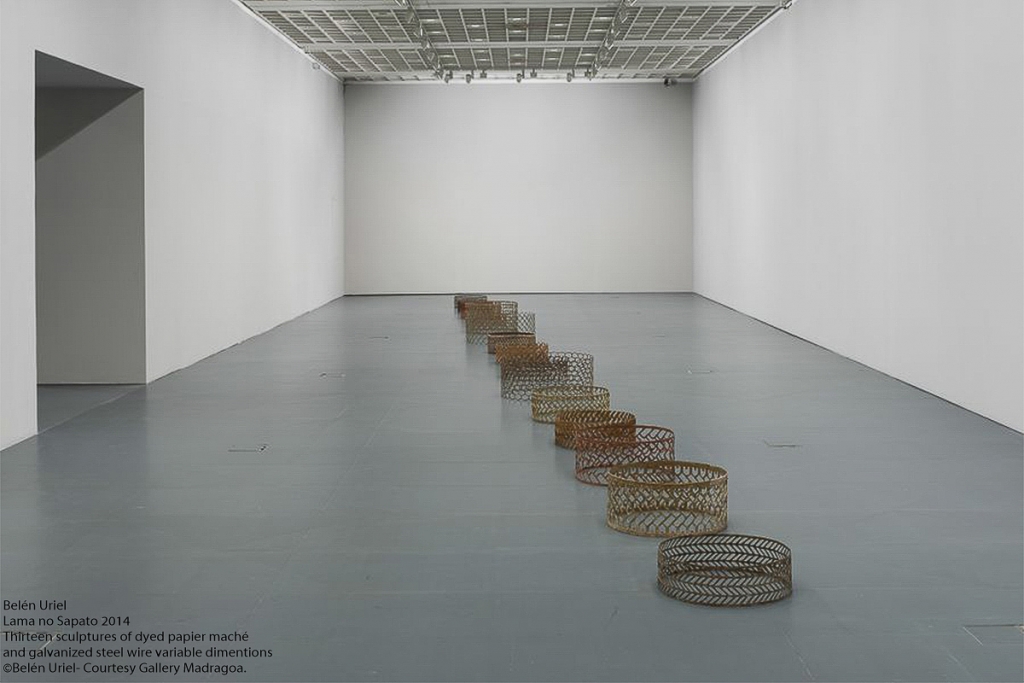 Lama no Sapato Belén Uriel transforms industrial, machine or handcrafted objects and traces of machine work into other materials, stripping the original objects of their meaning. What remains are familiar objects whose meaning now lies in their form, or, sometimes new forms created with familiar patterns from everyday life. In Lama no Sapato, molds of tire tracks in mud create patterns put into circular forms. Positioned in a row on the exhibit floor, the tire trackstake on a sculptural quality in their new form.