Tamina Amadyar (*1989 in Kabul) and Philipp Modersohn (*1986 in Bremen) are two emerging artists from the vibrant Berlin scene. Taking various formal and medial approaches, both of them are engaged in the contemporary appropriation and recontextualisation of significant tendencies in modern art. Tamina Amadyar is dealing with memories to places and situations and transforms them into very free but precise paintings, which appear as topical translations of the vocabulary of classical modern abstraction. Philipp Modersohn works with all kinds of sand based materials and recycled plastics, testing it under artistic circumstances to produce sculptures and installations, which are continuously changing from indoor and outdoor objects, referring to Land Art and architecture with a contemporary impetus on the Baroque. 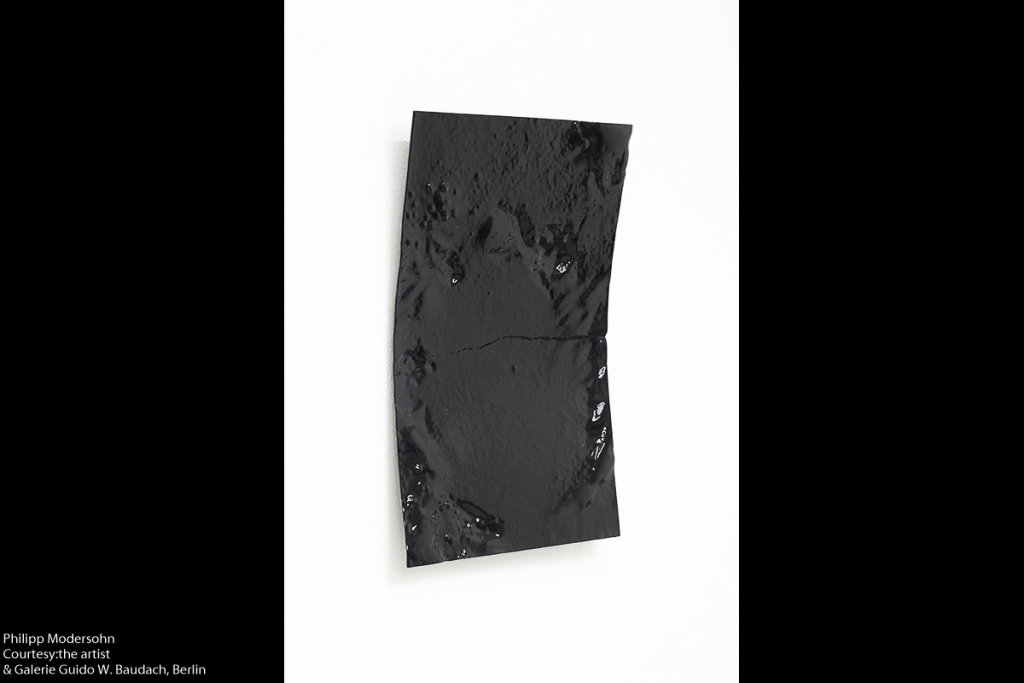 The paintings of Berlin based Tamina Amadyar (*1989 in Kabul) impress the viewer with an immediacy of concrete tangibility. What comes to the fore as clear and obvious pictorial settings, is however at the same time the result of an intense preoccupation with the Status Quo of painterly abstraction.

In Amadyars works from the time of her graduation at the Art Academy in Düsseldorf (2013/14), different threedimensional situations and spatial sectors are recognizable, which are inspired by personal memories of the locations and places where the artist used to live or stay. A clear recognition of these locations is nevertheless expanded and set out in painting with intense and unique colour-space effects.

The space defining presence of the pure colourfulness is also related to a specific choice of painting material. Amadyar uses the traditional glutine- or hare glue not only as a primer for her canvases, but also as binder for the color pigments, from which a gripping – basically a contradictory effect of liquidity and density, as well as transparency and solidity results. Even more, the quickly drying, solidified coloured areas are executed with a wide brush and are built out of only a few layers, which generate an appealing energetic tension with the omissions consisting of the translucent primed canvas, that the viewer can perceive as equivalent. 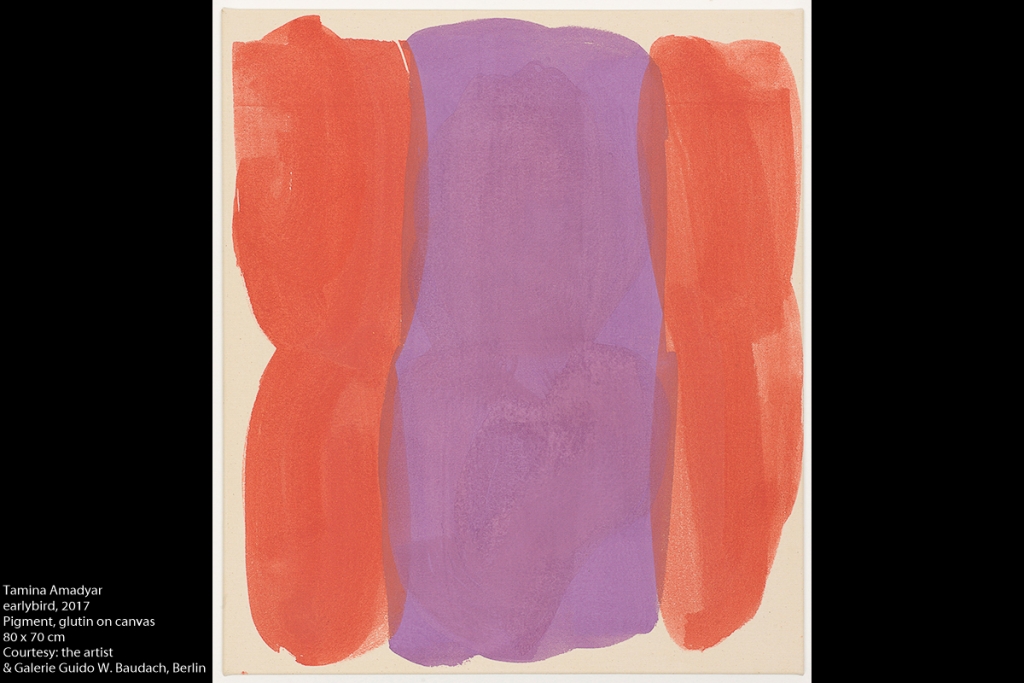 In Amadyars recent paintings this balance of “empty“ and color-defined areas is getting more obvious. The linear precision of three-dimensional constructions has developed into the direction of smoothly swung out, sculptural form-constellations, though a perspective framework is still present. Spatial depth-effects and narrowings, as well as the getting apart and the getting together of different colored zones determine the composition. In the way how a clearly geometrical structured spatial situation can be covered, veiled and shaped differently with fabric web or curtains, Tamina Amadyar operates with a painterly territory consisting of sharp and imprecise defined demarcations. The outwardly thrusted plasticity resulting from this, is the force that draws the viewer into the depth ot the image, and forms an interplay, that in this way – virtually – only appears in art. At the same time color is obtaining an even more pointed purpose as the basic indicator and generator of the pictorial space, as it was the case in Amadyars earlier paintings. The self-evidence of Tamina Amadyar´s painterly settings follows an inherent vitality and autonomy that is also determined by the medium itself.

Philipp Modersohn‘s artistic practice partakes in an examination of the meaning of large-scale so-called „natural“ processes that today are actually often driven by conditions created by humans. By and large people seem to agree to a certain degree that we are now in the Anthropocene, the geological age in which the gestalt of our earth is largely decisively impacted by human presence and activity. Consequently, Modersohn‘s exploration of geological processes also throws the role of design into stark relief, given that his ambivalent objects make reference to global natural phenomena on the one hand and to the role of human beings on the other hand. Philipp Modersohn’s work can be read both as an object and as a process, as its form oscillates between being something given and something created, or emerging. The shape that the objects themselves ultimately settle in, however, is not determined solely by the artist, but comes into being through the interplay between the artist-asdesigner and the process. This makes it difficult to categorise and reference the works without explicitly naming them. One might say that they evoke a series of analogies and references, but do not become fixed – which simultaneously makes them very close and very distant for us observers. 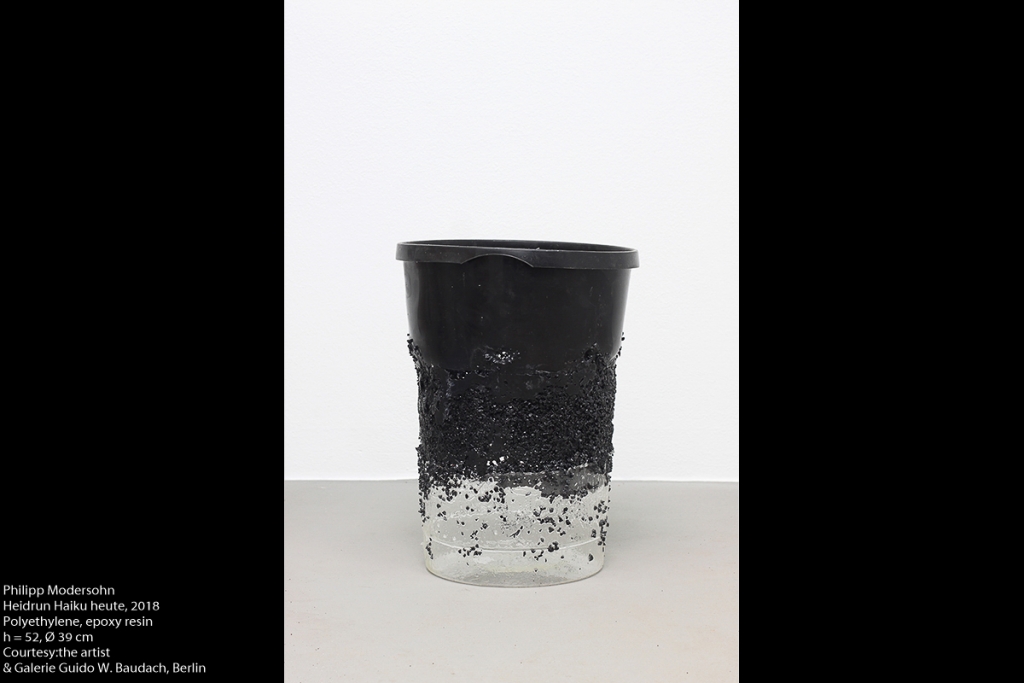