Keith Tyson British, born in 1969) Turner Prize in 2002, Tyson has been working the last five years on this new sophisticated and refreshing series of « Les Fleurs » paintings in which he reappropriates with virtuosity and panache the academic style of flower paintings by Ancient masters.

Jacques Villeglé (French, born in 1926) One of the last founders of Nouveau Réalisme (French and European Art Movement from the 60’s) still alive, Villeglé started to collect ripped posters by anonymous people in 1949. His work belongs to prestigious collections such as Guggenheim and MoMA and was recently exhibited at the Metropolitan Museum. For our booth, we selected an iconic work of 1965 from the series « Images » which features the very last painted ads of this era before the common photographs.

Julien Bismuth (French-American, born in 1973) We’ll exhibit on our booth the latest digitals photographs by Julien Bismuth, conceptual artist exhibited in prestigeous institutions such as Tate Modern, Kunsthalle of Vienna and last year, a solo show at the Museum in New York. In this new series of “Steganograms” made after spending one month with a Pirahã tribe in the Brazilian Rainforest, Julien Bismuth continues to explore the limits of both linguistic and visual systems of communications.

Richard Jackson (American, born in 1939) Experimental and craft artist, Jackson questions painting through different supports using all sorts of mechanized machines. In his last show “French Kiss” in November in Paris, he created piece by piece a whole French typical café (the real version was upfront the gallery) with a a giant spinning palette. We will display on our booth a neon sign of this exhibition alongside his famous sculpture «Deer and Skeleton» featuring his cherished deer peeing blue paint.

Martin Kersels (American, born in 1960) Californian artist and teacher at Yale University, Martin Kersels produces works of Art which radically redraw the boundaries separating the both performative and sculptural dimension of his work. For the Armory Show, he imagined «Record Collection #7» from a new form of «wall discography», using old-fashioned and kitschy record sleeves.

Niki de Saint Phalle (American-French, 1930-2002) Starting her international career at the beginning of the 60’s with her “Tirs” (Shooting Paintings), Niki de Saint Phalle collaborated with all the avant-gardes from Robert Rauschenberg and Jasper Johns to Tinguely, her lover and working partner. «Be my Frankenstein» is a monochrome assemblage made of plastic dolls and all type of small common and domestic objects found in her close environment. This heathen ex-voto is one of the last available reliefs- assemblages she made from the « Coeur / Heart » series.

Pierre Seinturier ( French, born in 1988) Pierre Seinturier’s works are full of poetic and enigmatic stillness with a dramatic atmosphere inspired by Hollywood screenplays and American iconography. This young painter recently had a solo show at the Saint Etienne Museum (France) as well as at the Palais de Tokyo in Paris.

Taro Izumi (Japanese, born in 1976) Using irony, play and disturbance, this trickster artist will display two original works including «Night lie», a new series of poetic and romantic urban videos made during his residency in Paris and an installation mixing assemblage and video from his «Tickled in a Dream» series exhibited at the Palais de Tokyo (Paris) last year. With this strange disposal, he proposes a ironic thinking about performance and body language through sports images. 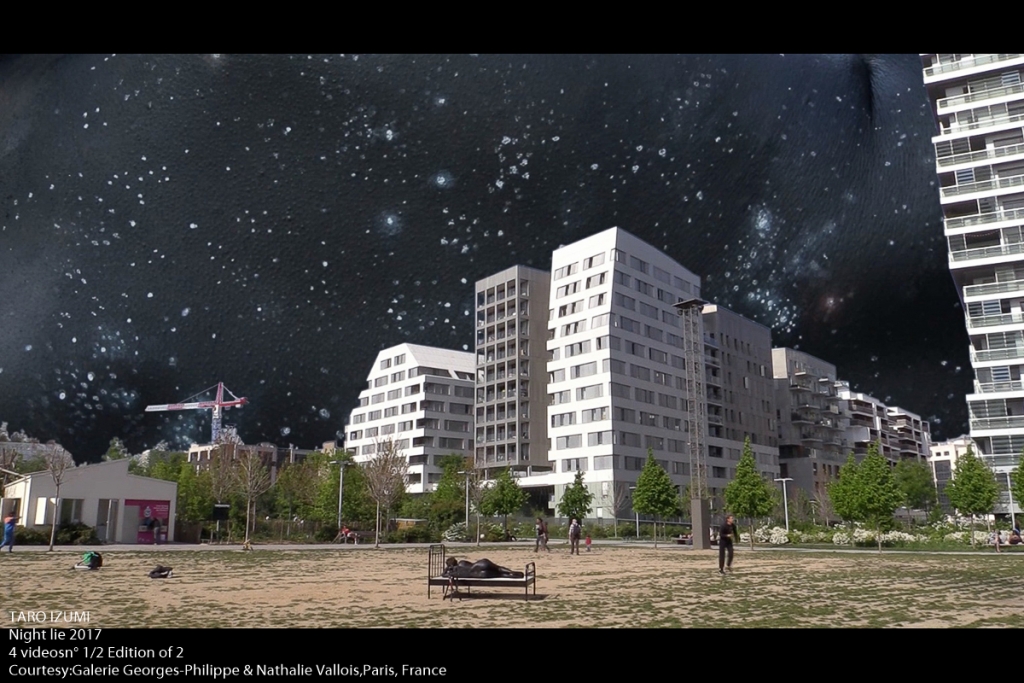