London – A collection of artists who radicalised traditional methods for making art by pushing the boundaries of the pictorial plane, using revolutionary materials, and dismantling visual history will be a focal point of the Post – War and Contemporary Art Evening Auction on 6 March 2018, part of ‘ 20th/21st Century Week’ at Christie’s. 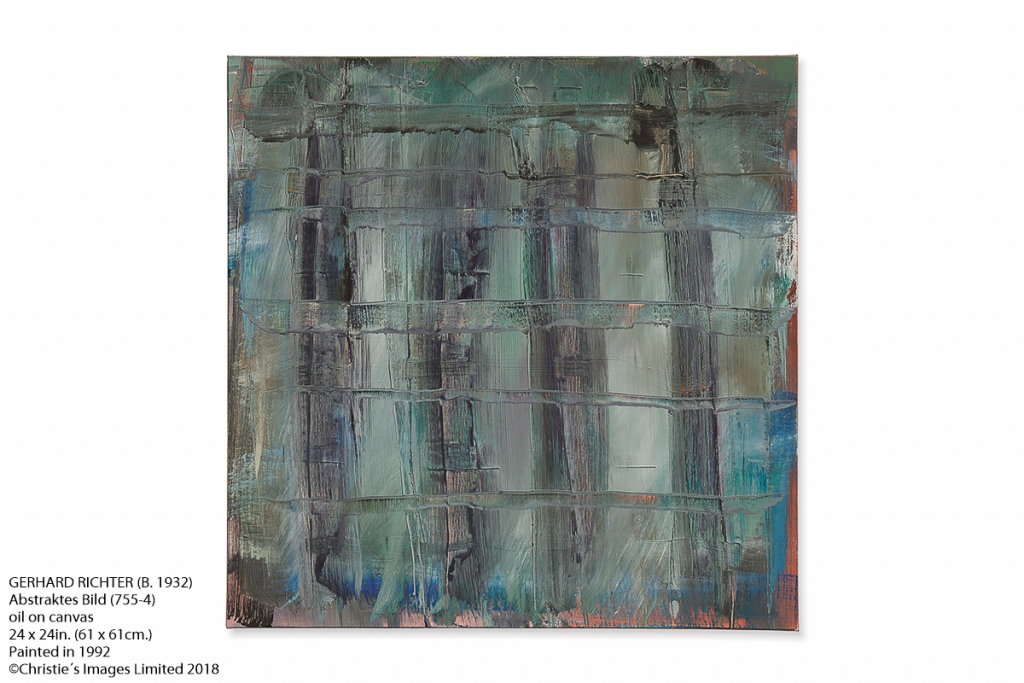 The group will be led by Lucio Fontana’s masterpiece Concetto Spaziale, Attese (1965, estimate: £8,000,000 – 12,000,000), a two – metre long white canvas cut with 24 of Fontana’s iconic vertical slashes, the greatest number he ever comm itted to a large – scale work. To add a further dimension to the painting Fontana enshrouded it in a highly reflective black lacquer frame, and it is therefore a totally unique object by the artist.  Additional highlights include Alberto Burri’s Ferro T (1959, estimate: £3,000,000 – 5,000,000), an imposing and beautiful patchwork forged from jagged panes of soldered metal, weathered usi ng fire and the process of oxid ation, from Burri’s celebrated series of 12 Ferri (‘Irons’), nine of which are housed in museum collections internationally. Thomas Schütte’s Bronzefrau Nr. 7 (2002, estimate: £2,000,000 – 3,000,000) offers a powerful critique of monumental sculpture: created from bronze and Cor -Ten steel it   both mines and undermines Classical and Renaissance traditions. Dan Flavin, Anselm Kiefer and Gerhard Richter are also represented in the collection. The works will be exhibited in London from 28 February to 6 March 2018.

Executed at the apex of the space age, a new phase of which we are entering now, Concetto Spaziale, Attese attests to Fontana’s quest to seek a fourth dimension. Originally owned by Carla Panicali for over thirty years, the work set the world auction record for the artist’stagli when it sold to the present owner in 1998. Not only are the formal qualities of Concetto Spaziale, Attese unique in  Fontana’s oeuvre but a dedication written by the artist on the reverse reads: Yesterday Tro-tro Klein came to visit me. The visitor in question is Rotraut Klein, the sister of Günther Uecker, the widow of Yves Klein (who died in 1962), and an artist in her own right. As well as recording Fontana’s personal friendship with Rotraut Klein, the inscription bears witness to a key artistic exchange at the heart of the post – war European avant – garde. Fontana and Yves Klein had worked closely with Günther Uecker, Piero Manzoni, Heinz Mack and Otto Piene as part of ZERO, united in their exploration of light and space without representation or illusion. With its visionary use of white, black, shadow, reflection and balletic rhythm, Concetto spaziale, Attese is an unmatched expression of these ideas in Fontana’s art. Engaging with a new form of conceptual purity that was emerging in the mid – 1960s, Concetto spaziale, Attese also reflects Fontana’s fascination with the developments of AmericanMinimalism.

“We are delighted to present this special collection which is led by two major Italian artists in the context of their international peers. The sense of material which is at the core of Italian Post – War art runs through this collection. One can see, touch and feel the purity of iron, Cor – Ten steel, bronze, canvas, lacquer and light in this highly sensuous group. The Fontana is a truly remarkable object where minimalism and a sense of adventure to find a new space come together in a gorgeous symphony of 24 cuts on white canvas, which would never be repeated by Fontana in one piece.” 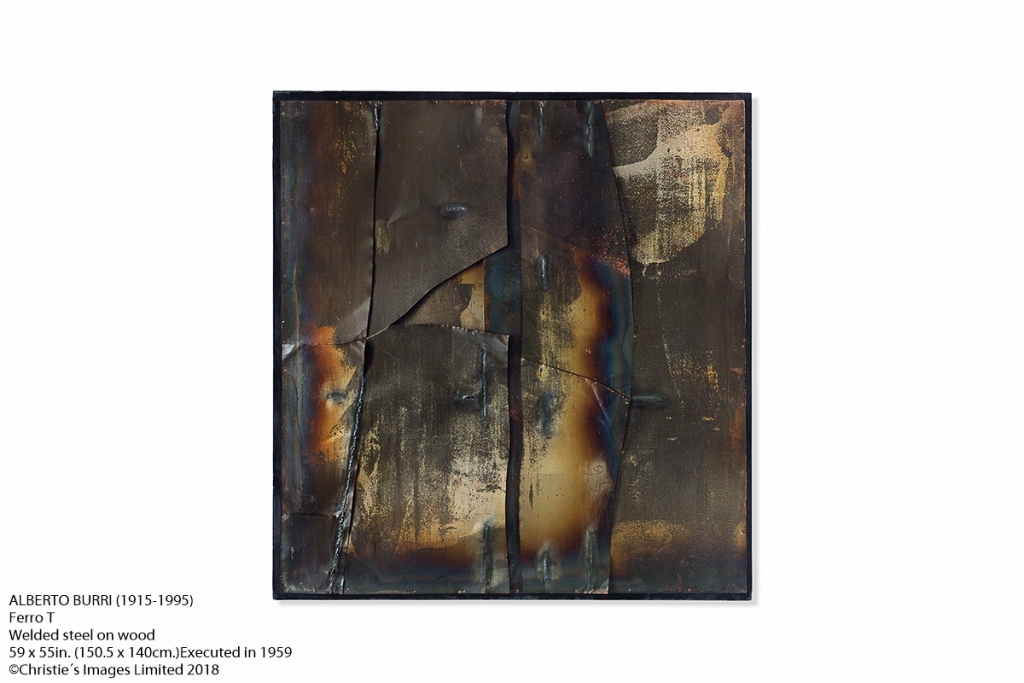 Alberto Burri’s Ferro T plunges from smooth planes to gaping fissures and delicately soldered seams, and is almost baroque in its variegated lesions, abrasions and welts. Its colours range from matt, carbonised darkness to flashes of rough – hewn silver, bronze, and gold, mottled browns, and a lush halo of rainbow -like oxidation. As in Fontana’s work, the play of light activates the surface withglints and shadows as the viewer shifts in space. His use of weldediron reflects the age of mechanised industry, while also echoing thedamaged landscapes of post – war Italy. Without recourse to the Alberto Burri, Ferro T, welded steel on wood, 59 x 55in. (150.5 x 140cm.) (1959, estimate: £3,000,000 – 5,000,000) traditional means of brush, canvas and illusion, he has ‘painted’ with fire and iron, c reating a tight, balanced composition with all the compelling pictorial logic of a great abstract painting. In Ferro T Burri echoed the wounds and ruins of the war, not in a statement of despair, but rather in a vision that acknowledged the violence of his time. In Ferro T’s twisted, cut, soldered, nailed, burnt and shorn metal Burri carved out a powerful new artistic language.

Executed in 2002, Bronzefrau Nr. 7 stands among the most enigmatic figures in Schütte’s landmark series of eighteen Frauen (Women) begun in 1998. With head, neck and limbs conspicuously absent, the bronze torso unfurls upon a vast Cor – Ten steel plinth, as if emerging from a chrysalis. Like a precious antiquity unearthed, its rich, variegated patina is juxtaposed against the steel pl- inth on which it lies. It recalls the bronzes of Rodin and Moore and the reclining nudes of Picasso and Matisse and yet the limbs are truncat ed and contort ed . Thomas Schütte, Bronzefrau Nr. 7, bronze figure on steel table, 51 x 98 x 49 ¼ in. 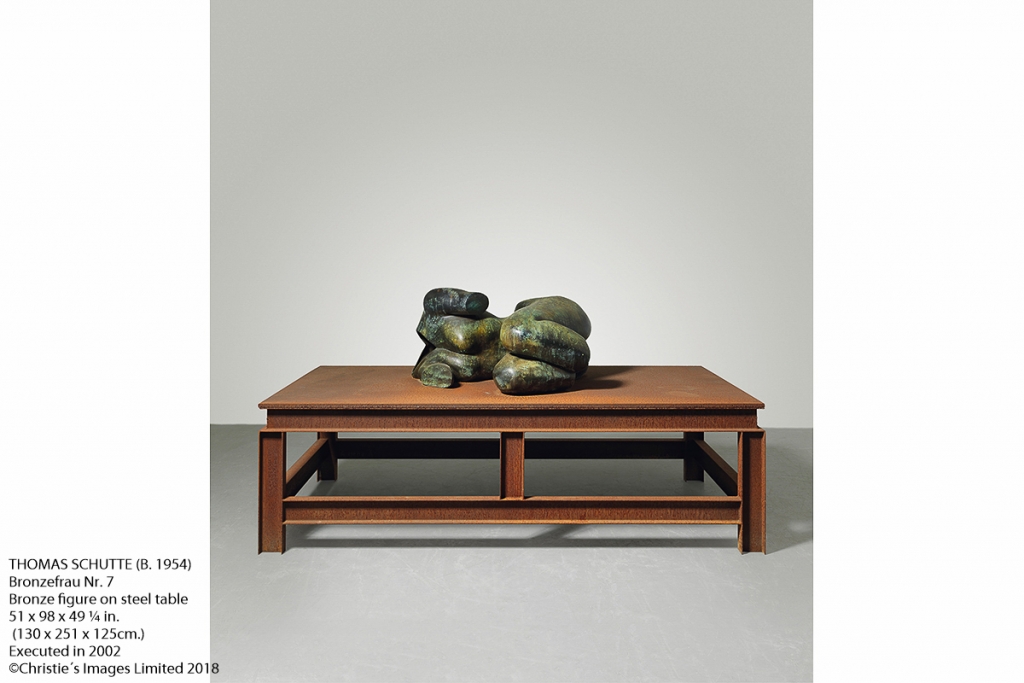 Minimalism’s proponents, such as Dan Flavin, were concerned with the use of real sp ace and light and the rejection of picture – plane illusionism of Fontana’s art. Composed of eight vertical tubes of white fluorescent light of varying lengths, untitled (monument for V. Tatlin) (1968 / 89, estimate: £250,000 – 350,000) is an early work from Flavin’s seminal series of ‘monuments’ dedicated to the Russian Constructivist Vladimir Tatlin (1885 – 1953). 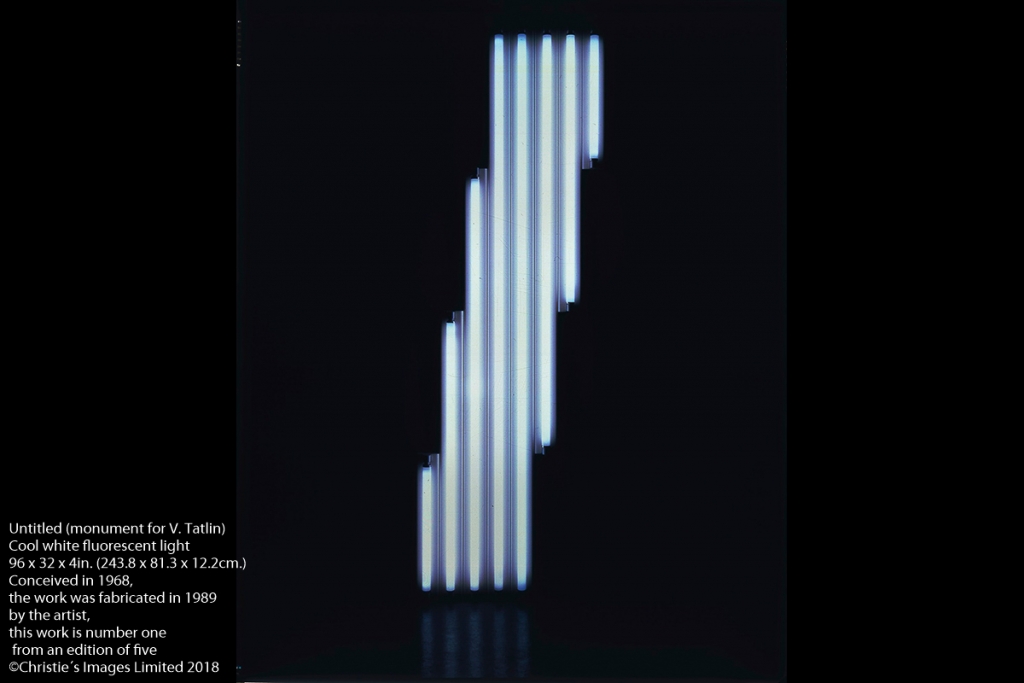 Anselm Kiefer’s Am Anfang (In the Beginning) (1998, estimate: £ 400,000 – 600,000), is a large, almost completely abstract painting m ade using a heavily – encrusted mixture of shellac, emulsion, acrylic, ash and sunflower seeds. Following Burri’s use of the elements as an artistic material, Kiefer has dug into, poured, splashed, pushed and pulled the surface in a myriad of directions, as well as scattered it with ash and sunflower seeds. 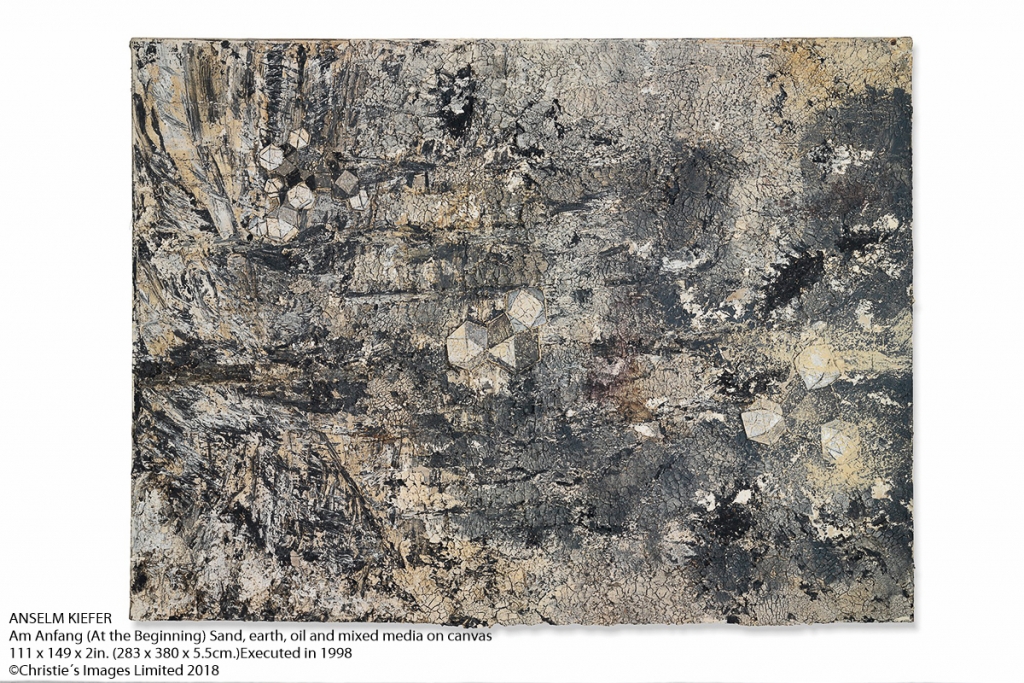 Gerhard Richter’s Abstraktes Bild (755 -4) (1992, estimate: £400,000 – 600,000) is a shimmering greyscale vision dating from the finest period of his abstract painterly practice. The present work combines the chance effects of paint with the underlying structure of the grid, used increasingly in his work of this period – exemplified in his landmark suite of Bach paintings.