The first edition of ART DÜSSELDORF will be held from 17 – 19 November.

Around 80 established and young galleries from 21 countries will present modern and contemporary art (1945 – 2017) in the halls of the former factory complex Areal Böhler.

ART DÜSSELDORF will feature 80 established and young galleries, with nearly 60% from Germany and the Benelux. For Beck & Eggeling (Düsseldorf), the Italian video – pioneer Fabrizio Plessi is creating an installation especially designed for the fair, which will feature 1 2 LED screens and stand next to the life – sized sculptural ensemble 30 Standing Figures by the late Magdalena Abakanowicz. Taking up the whole booth at Galerie Brigitte Schenk ( Cologne), Klaus Fritze is creating Der Zuwachs fällt der Hauptsache zu II (2017), an elevated hunting blind to stimulate a change of perspective and conversation about criteria and structures of order and selection. 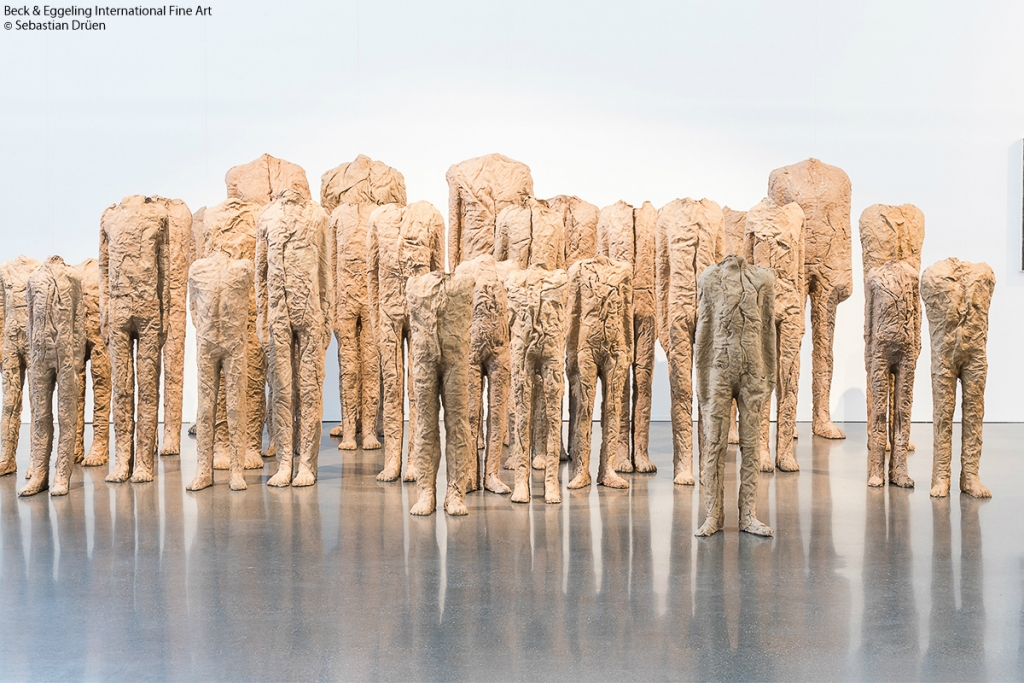 More large – scale installations include the large wallpaper installation, The Cast and Crew of the Old Revolutions (2017) by Marcel Dzama, displaying the sketches of some of his costume designs and characters of his films and drawings. The piece is currently exhibited at La Casa Encendida in Madrid but available for sale at Sies + Höke (Düsseldorf). Another large wallpaper installation that featured in the Viva Arte Viva exhibition in Venice this year will be presented by ChertLüdde (Berlin). The five – meter – long ABETARE (2015) by Petrit Halilaj features scans of an Albanian school book.

Galleries from the region will share booths with international galleries. Düsseldorf – based Max Mayer is collaborating with Misako & Rosen from Tokyo to present the artists Richard Aldrich and Ei Arakawa , who regularly collaborate. Linn Lühn , also from Düsseldorf, and CANADA Gallery from New York will show together new works by Kunstakademie Düsseldorf al umni Florian Baudrexel and Christoph Schellberg.

There is a strong representation of artists who are from or live in Germany or the Benelux. Galerie Thomas Zander (Cologne) will show photographs of Düsseldorf by Candida Höfer and photo works by Jürgen Klauke , and Bartha Contemporary (London) will display new sculptures by Mike Meiré. Highlights at Rodolphe Janssen (Brussels) include new works by Gert & Uwe Tobias as well as Sanam Khatibi, while Tim Van Laere (Antwerp) will present Adrian Ghenie, Kati Heck and Jonathan Meese. 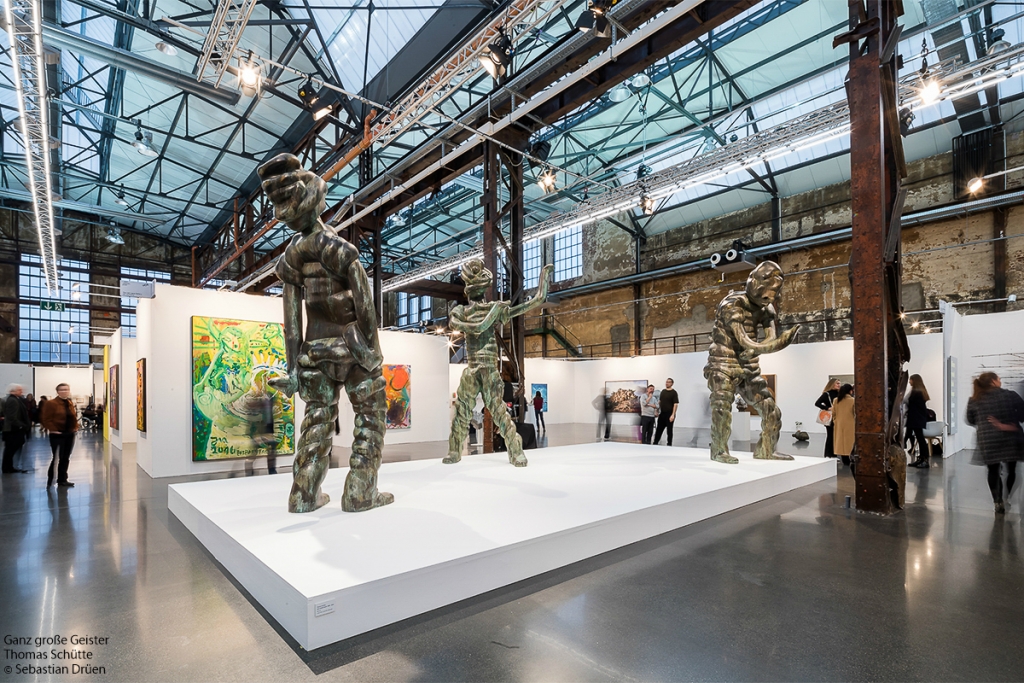 Highlighted as standout booths called “References” across the fair, galleries will juxtapose contemporary artworks with an outstanding masterpiece created before 1945. MAM Mario Mauroner Contemporary Art Vienna will present a booth curated around Paul Klee’s watercolor Edelklippe (1933, when Paul Klee lost his professorship at KunstakademieDüsseldorf), which displays a visionary place of shelter to prisoners and refugees, with works by the gallery’s Austrian artists Philipp Mentzingen and Herbert Brandlas well as the British sculptor Tony Cragg. MichaelWerner Kunsthandel (Köln) spotlights the painting Reclining Nudes (ca. 1939) by Francis Picabia. The avantgarde artist uses references as part of his artistic strategy and his work in turn was referenced by Sigmar Polke, who also is amongst the represented artists at the gallery’s booth.Die Galerie (Frankfurt) is dedicating their booth to a solo show of Roberto Matta and Galerie Bastian(Berlin) to Robert Rauschenberg.

“In addition to being a state capital, Düsseldorf is also acapital of Germany’s art market. That makes me all the more excited about ART DÜSSELDORF: With an impressive selection of the most exciting and influential galleries, it brilliantly rounds off our cultural offering alongside the art academy and a stimulating museumlandscape.”

“We are excited to welcome visitors and outstanding galleries from all over the world to the first edition of ART DÜSSELDORF.The Rhineland is a very relevant region for the art market with strong standing in contemporary art history , which is going to come alive through ART DÜSSELDORF“ 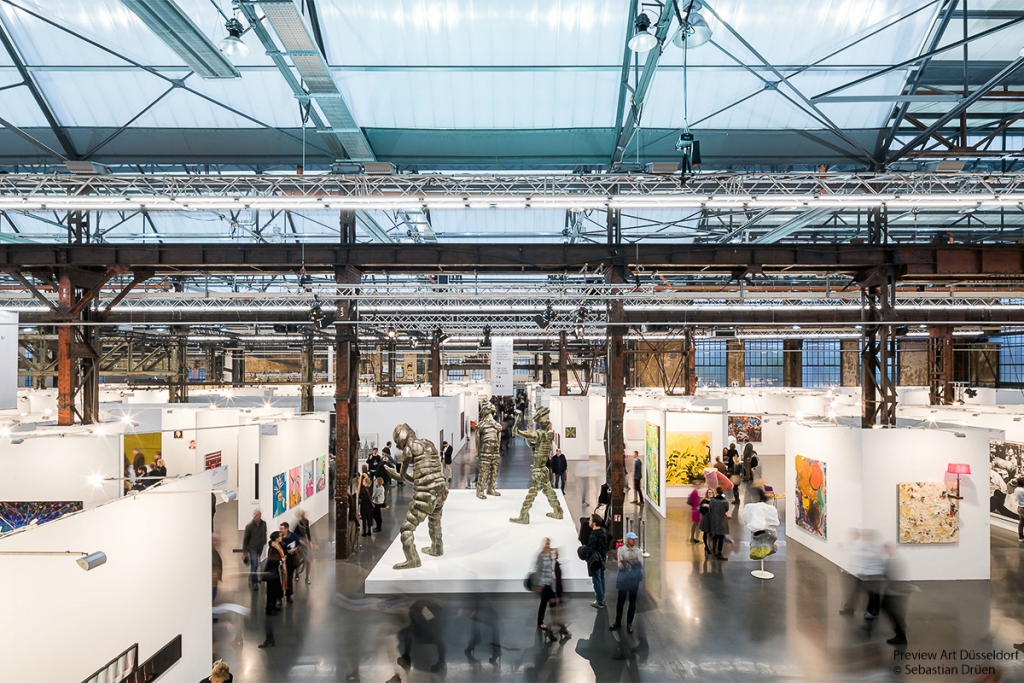 Art Düsseldorf will be opening its gates for the first time November 17–19, 2017, in the spacious and bright halls of the Areal Böhler. The premiere’s preview will be celebrated on November 16, 2017.