With two disruptive events presenting the different facets of Alec:a live painting at the TAG Heuer boutique for his limited edition Connected Watch and a massive art installation on the main façade of theFontainebleau Hotel in Miami Beach

TAG Heuer celebrated Miami Art Week with Art Provocateur and Brand Ambassador Alec Monopoly. The Swiss Watch Brand kicked off the week with a cocktail party on Wednesday at the TAG Heuer Boutique located in the very heart of Miami Design District where Alec Monopoly unveiled new artwork decorating the façade of the building.

Guests were treated to a live performance as Alec spray painted 300 white rubber straps for the upcoming release of his limited edition Connected Modular 45. The specialized dial will feature Alec Monopoly’s signature graffiti and will be presented in special packaging. The piece will be available for pre-order on tagheuer.com later this month.
On Thursday, Alec Monopoly staged an art takeover of the Fontainebleau Hotel, scaling a 40 foot wall on the front of the building to create a one-of-a-kind art installation bearing the TAG Heuer logo and Alec’s namesake character. Alec Monopoly exhibits a special fearlessness in pursuit of creativity, and embraced the challenge to not crack under pressure while painting despite the terrifying height of the installation. Hotel guests can view another special installation on the windows overlooking the pool and rooms at the Fontainebleau, along with a special sculpturecommissioned for the occasion.

“I am thrilled to return to Art Basel Miami and celebrate the one year anniversary of my announcement as Art Provocateur for TAG Heuer”, said Alec Monopoly. “It’s exciting to celebrate the occasion with new artwork that depicts both my love of timepieces and the vibrant energy of South Beach.”

Kilian Muller, President of TAG Heuer North America, added, “We are proud to welcome Alec Monopoly to Miami for Art Basel. Alec shares TAG Heuer’s determination to push boundaries and his Art Takeover of the Fontainebleau Hotel reflects his willingness to conquer any challenge – even a 40 foot wall!” Alec’s artwork, overlooking the iconic South Beach destination Collins Avenue, will be displayed through the end of Art Basel Miami. 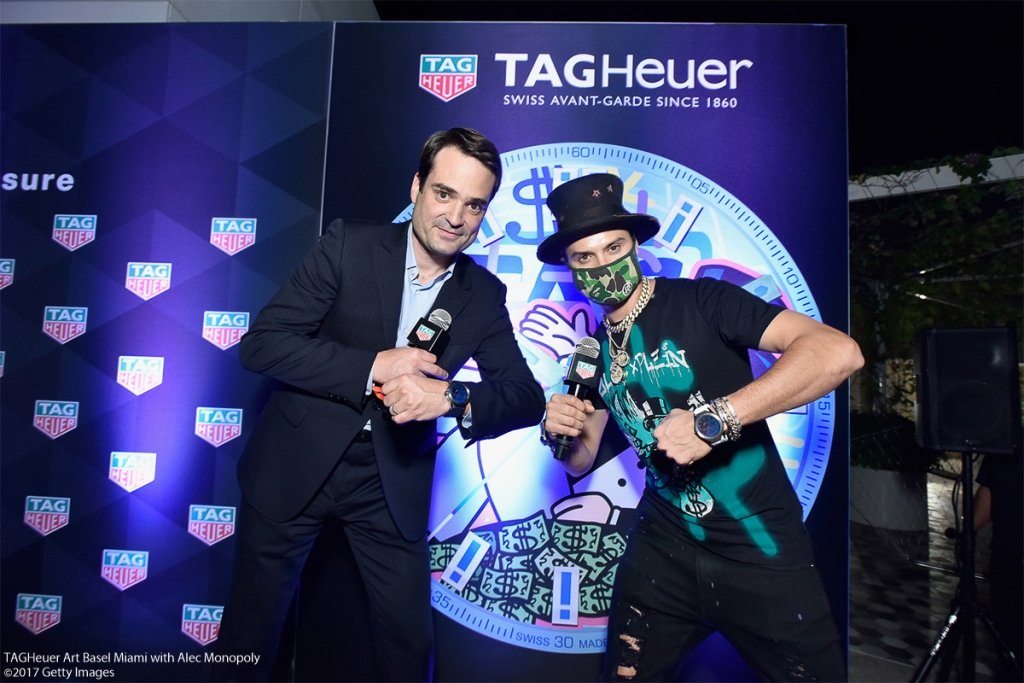 About Alec Monopoly. Sporting a hat, with his face always hidden behind a bandana to preserve his anonymity; but what is he famous for? Well, Alec Monopoly owes his fame to the character who shares his name. Mr. Monopoly, the diminutive and debonair banker that the artist depicts in different scenarios. „When I started out, I did my graffiti in New York. The city was a huge source of inspiration“. In 2008, he quit the Big Apple for California. This was the year that the financial markets crashed. The subprime crisis, Wall Street, Bernard Madoff… The finance world experienced its darkest days. And this found its echo in Alec’s work. His career took off. „This was my way of making a statement about what was happening.“ His work started to gain an online following amongst street art aficionados. People started to call him Alec Monopoly.

Since then, he has depicted the little banker in every conceivable situation… His rich, colourful works using this character – known throughout the world – are filled with humour. In the meantime, Alec Monopoly has turned his focus towards decontextualizing other icons of popular culture. Scrooge McDuck, Richie Rich… Today, Alec’s signature is worth a lot. Numerous American stars, such as Seth Rogan, Adrien Brody and Robert De Niro, have bought his works.

About TAG Heuer TAG Heuer, the avant-garde of Swiss watchmaking since 1860. Ever since, TAG Heuer has been striving to push the boundaries further, inventing timepieces for those who love to defy convention. This technical expertise was harnessed at a very early stage for achieving extreme accuracy, particularly in the creation of exceptional chronographs.