The Galleria Antonacci Lapiccirella Fine Art of Rome showcasing an unpublished painting by Antonio CANOVA which constitutes a major rediscovery and marks a significant addition to our knowledge of the great sculptor’s work as a painter.

The painting in question is a „Self-Portrait of Giorgione“, 1792, an oil painting on wood, cm. 72,5 x 64, still housed in its magnificent original carved and gilded frame made in Rome, which we know to have been commissioned by Roman Senator Prince Abbondio Rezzonico, the young sculptor’s great protector and patron who was the picture’s first owner. 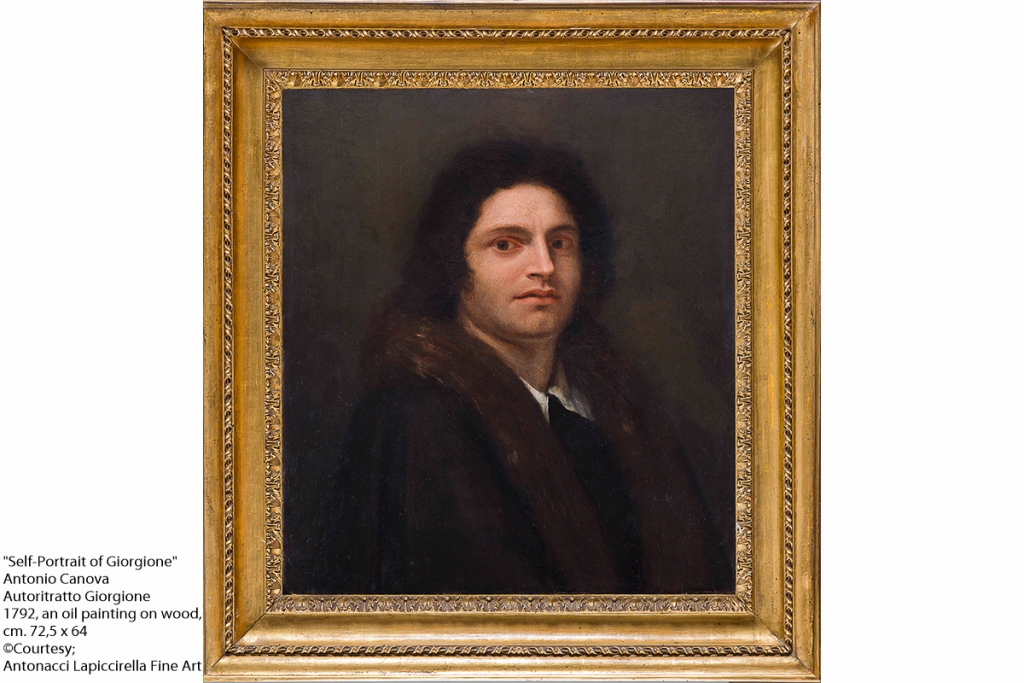 Rezzonico, nephew to Pope Clement XIII, commissioned Canova to carve his uncle’s tomb in St. Peter’s Basilica, a monumental undertaking which contributed enormously to the definitive establishment of the sculptor’s renown.

Rezzonico was also an accomplice in the bizarre story of the trick that Canova played on the greatest artists then present in Rome – people of the calibre of Angelica Kauffman, Gavin Hamilton, Antonio Cavallucci, Giuseppe Cades, Giovanni Volpato and others, who were invited to dine at the Senator’s home and shown this painting, which was palmed off as an original Self-portrait of Giorgione. They all adored it, thanks also to the mastery with which it had been painted, and acclaimed it to a man as an authentic work by the Venetian 16th century painter.

The truth of the matter was that Canova himself had skilfully painted the portrait on a 16th century panel painting of the Holy Family, the image of which has been traced through reflectography and infrared inspection, taking as his model a portrait of Giorgione from Carlo Ridolfi’s Le meraviglie dell’arte published in Venice in 1648.

By 1792, when the famous dinner was held, Canova had already tried his hand at painting in the Venetian Renaissance style, producing, for example, a Venus with a Mirror which had also been mistaken for an authentic 16th century work.

The event is narrated by all the most authoritative sources for Canova’s life, in particular in the first monograph devoted to him by Fausto Tadini and in the two biographies penned by his secretarius Melchiorre Missirini and by the sculptor Antonio D’Este, who ran his workshop in Rome..

„…It pleasing our sculptor that his painting should be taken for an ancient work…“, he ordered the purchase of a 16th century panel on which a Holy Family had been painted, and on it he painted the portrait of Giorgione in such a way as to make it look as though it was by the hand of that great Venetian artist himself. The trick worked perfectly, indeed so perfectly that many members of the cultural elite of the time, including the artists Giuseppe Cades, Angelica Kauffman, Hamilton and Volpato who had gathered at Prince Rezzonico’s palace expressly to view the panel, were utterly taken in. 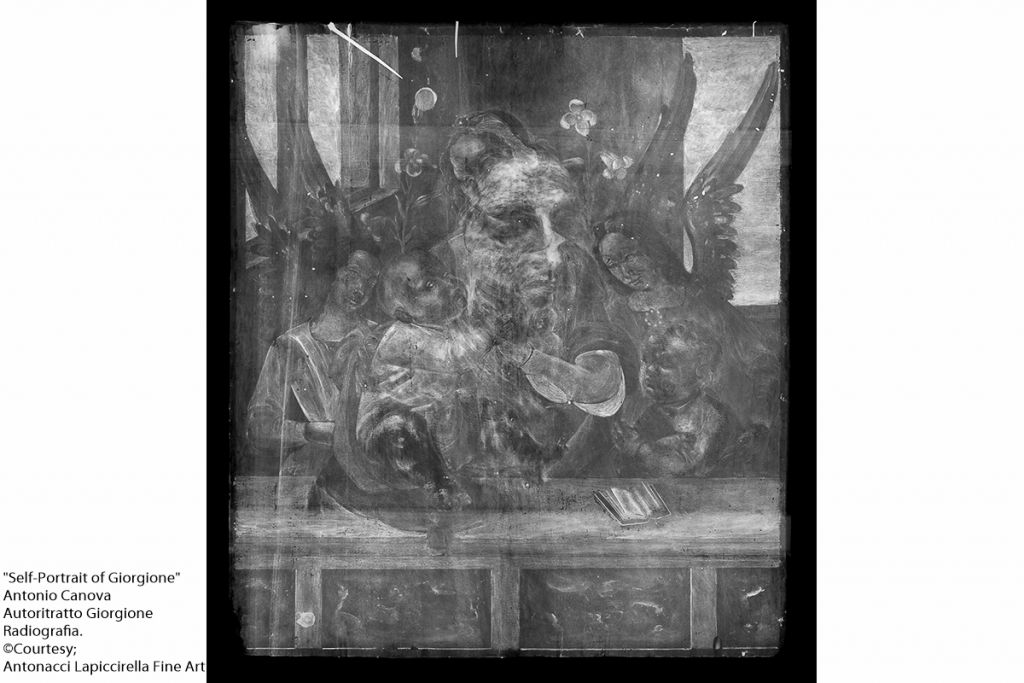 On Prince Rezzonico’s death the painting was bequeathed to Cavalier de Rossi, who sold it to a dealer in Via del Paradiso in Rome in order to pay off a debt.

The painting will be on public display for the very first time at the TEFAF Maastricht 2018 fair.

Canova clearly intended to show off his accomplishment as an all-round artist, as talented in painting as he was in sculpture, thus harking back to the old debate between the two sister arts. This, because while a sculptor can perfectly reproduce an old master painting and deceive numerous experts, the opposite is a far rarer occurrence, and therefore painting is not the complex, supernatural art people too often make it out to be because sculpture can surpass it.

Canova authority Fernando Mazzocca has confirmed this major discovery and reconstructed, in the catalogue published for TEFAF, all the phases of this fascinating and exemplary story pointing up Canova’s love of the glorious tradition of Venetian painting, in which he also sought inspiration for his sculpture.