A wall clock as no-one has seen before!

Vanitas wall clock is the first co-creation between Fiona Krüger and L’EPÉE 1839.

A Vanitas is a still life artwork which includes various symbolic objects to remind the viewer of the transience of life. This was an important and popular genre of painting in the 1600’s and include symbols like skulls and extinguished candles. 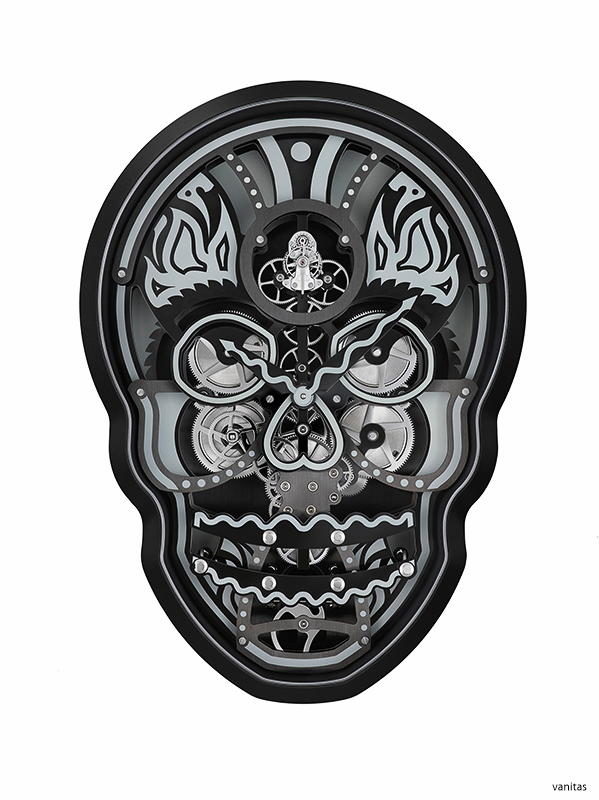 The Skull is the ultimate symbol of life, death and human experience – as such it has played a key role in both Horological Historyand Art History.
Through Fiona Krüger’s artistic approach to Haute Horlogerie and L’Epée’s know-how, the Skull has been re-interpreted into a mechanical Vanitas painting for the 21st Century.
Fiona’s Fine Art and Design training, combined with her international upbringing are apparent in the design of this mechanical symbol. Having spent part of her childhood in Mexico City her vivid memories of the Dia de los Muertos festival have influenced her own skull collection and this latest collaboration with L’Epée.
This mechanical Vanitas is rich in symbolism but also in humour. The bridges of the clock are intricately detailed, designed to build up into a pattern which ultimately forms this ornate skull.
Vanitas is engineered and crafted by L’Epée 1839, Switzerland’s specialised high-end clock manufacturer, founded in 1839. This charismatic cranium reminds you to celebrate life. The hours and minutes are shown by the clock’s hands, and a power reserve indicator is integrated into the mouth ofthe skull. As Vanitas loses power it starts to yawn, indicating it needs to be wound up. Thoughwith a 35-day power-reserve, this monthly ritual will give you a moment to stop and take stock of the time you have.
Creativity is at the heart of both L’Epée 1839 and Fiona Krüger Timepieces. The challenge was really to create this modern day Vanitas with a humorous twist. The new “yawning” power reserve indicator required a whole new development and re-engineering of the clock movement. It is a marriage between fantasy and purpose, which is at the core of the collaboration.
The ideas of life, time and mortality are synonymous and even more relevant in mechanical clock-making today than they have ever been. The unique design of the Skull imitating yawning as the power reserve depletes, joined with the ability to bring the clock to life as its wound up, reflects the history of clock making where fantasy, creativity and purpose were all incorporated in equal measure to create designs which made people dream
Form folows function:
Form follows function is a principle associated with modernist architecture and industrial design in the 20th century. The principle is that the shape of a building or object should be primarily
based upon its intended function or purpose. When it is reinterpreted by L’Epée 1839, the movement and the shape of the clockbecome one. The clock is no longer made of a movement and a housing which gives the shape of the clock. The movement itself defines the shape of the clock and the design cannot be recognized without the movement. The eyes are the barrels (two of them), themouth is the power reserve, the philtra is the differential allowing the teeth to open up. 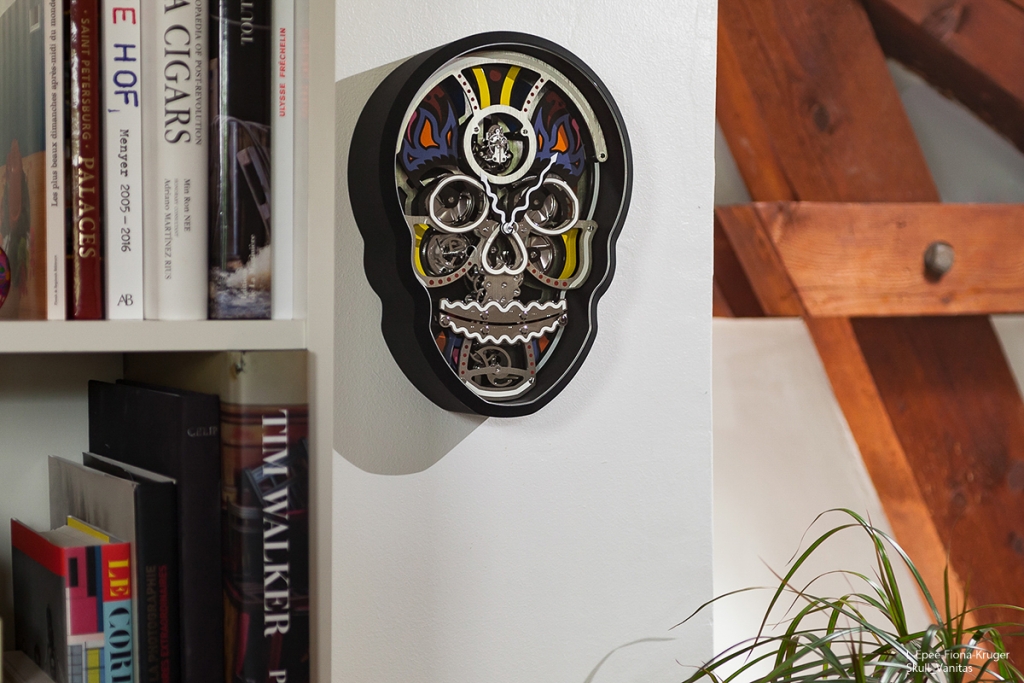 VANITAS is full of personality, with 2 of the movement’s barrels as “pupils”, the escapement as it’s “brain” the the “mouth“ acting as the power reserve. As the clock gets tired, it starts to “yawn”, indicating it needs to be wound up; as it’s owner winds it up, the clock is brought back to life and the mouth closes. There are 2 versions (colourful and dark), each produced as a limited edition of 50 pieces.
Fiona Krüger –  L´Epée  1839

A UNIQUE AND MUST HAVE  DESIGN CLOCK!